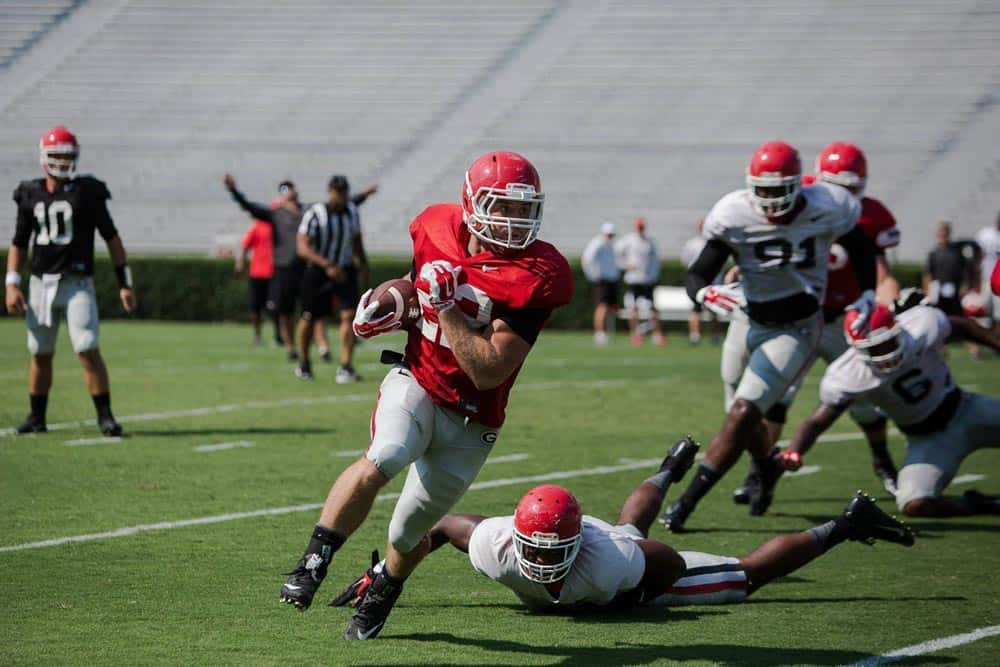 ATHENS, Ga. – The Georgia Bulldogs conducted their final scrimmage of the preseason Thursday at Sanford Stadium, working out for 90 minutes in full pads.

When Georgia coach Mark Richt met with the media earlier in the week, he said the final scrimmage would feature plenty of competition and not be a “dress rehearsal” as has been the case in past years. After Thursday’s scrimmage, he provided a few highlights but also said that Georgia was unable to overcome a 24-0 halftime deficit.

“We played the second half of a game and started out in the third quarter with the Bulldogs down 24-0 and ULM won it 31-24,” Richt said. “We had a couple of drives to try and tie it up, but we weren’t able to do that. I was thinking if we did tie it, we’d go to overtime because we haven’t practiced that yet.”

Redshirt sophomore quarterback Brice Ramsey started the third quarter for Georgia while junior quarterback Greyson Lambert took the snaps for the Bulldogs in the fourth quarter. Junior quarterback Faton Bauta directed the No. 2 unit as ULM. No statistics were announced but Richt said that the No. 2 unit functioned well and had success with Bauta leading them including a lengthy touchdown drive. Georgia’s scoring output featured a pick-six by the defense and a long touchdown run by sophomore running back Sony Michel. All three quarterbacks will continue to be evaluated, according to Richt.

The captains for the first game have been named, and they are senior linemen John Theus and Kolton Houston for the offense, senior linebacker Jordan Jenkins and junior linebacker Leonard Floyd for the defense.

“It’s a great honor to be named a captain for the first game, and these guys have earned it,” Richt said. “We take in to account everything they’ve done in the offseason and during camp. For example, Leonard is a guy everybody respects. He doesn’t say much but when he does, the guys pay attention. He has charisma, a trait you see in a leader.”

Georgia will practice Friday and Saturday and will be off Sunday before game week finally arrives. The ninth-ranked Bulldogs open the season against Louisiana Monroe Sept. 5 at noon ET on the SEC Network.