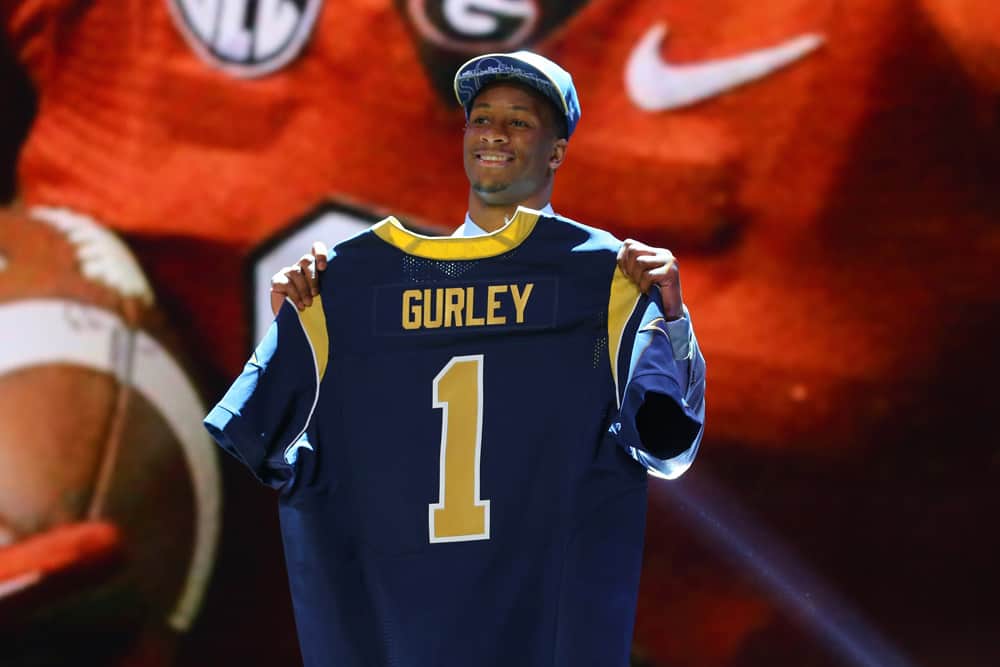 Todd Gurley will continue his football career in St. Louis! The Rams selected Gurley tonight in the first round of the 2015 NFL Draft (10th overall).

Gurley (6-1, 222) was predicted to be a first round selection and was even number one on one team’s draft board according to NFL insider Ian Rapoport.

After his selection, Gurley talked with ESPN’s Suzy Colber.

“For me to be the first running back taken, man, it means a lot for me,” Gurley said.

Later, Gurley got a little emotional talking about his recovery (video below).

“So, so hard. A lot of hard work. With the suspension, the ACL, man, it’s been a long journey.”

The St. Louis Rams kick off the 2015 preseason on Friday, Aug. 14 at the Oakland Raiders. Their first regular-season game is at home vs. Seattle on Sunday, Sept. 13 (2015 St. Louis Schedule).

Todd Gurley gets emotional discussing his journey back from suspension and the ACL tear.

Boom!! Top 10 pick! Congratulations Todd! It's great to be a Georgia Bulldog!

There Goes Gurley! With the 10th pick in the 2015 #NFLDraft, Todd Gurley is headed to the @STLouisRams. pic.twitter.com/FJCxtcAASL

They are turning into one of the most PHYSICAL teams, they just drafted the best RB since Peterson#NFLDraftAnalysis pic.twitter.com/BUzZT2oadI