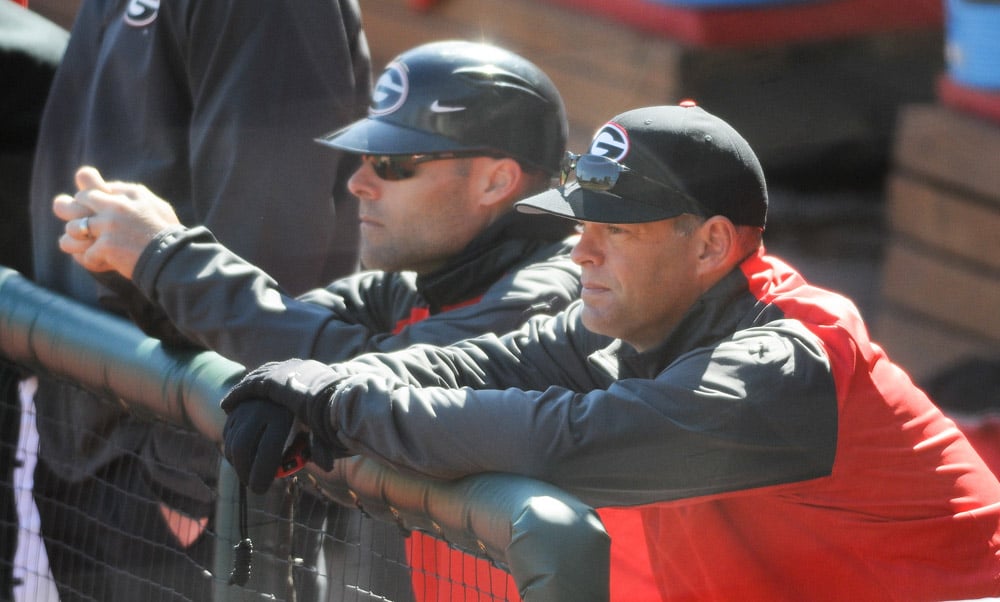 In game one Sunday, four Georgia Southern pitchers combined on a five-hit shutout for a 1-0 victory. The game began on Saturday and was halted due to rain in the bottom of the second inning.

When play resumed Sunday, the Eagles took a 1-0 lead in the second frame as C.J. Brazil moved Kent Rollins to second with a sacrifice bunt after reaching on a base hit. Then, the Eagle second baseman scored on a base hit by Logan Baldwin. Georgia threatened in the top of the third, loading the bases with a pair of hits and an error but Eagle right-hander Tripp Sheppard responded by retiring the next three Bulldogs to maintain their edge. Sheppard ran in to trouble in the fourth as the Eagles turned to ace reliever Jason Richman who got them out of another bases loaded jam to keep it a 1-0 contest. The Bulldogs left 10 men on base.

In game two, the Eagles rallied back for a 4-3 victory.

Georgia grabbed a 2-0 lead in the first off Eagle starter Connor Simmons. Freshman Keegan McGovern drew a one-out walk and freshman designated hitter Josh Day reached on an error by third baseman Will Hudgins. Third baseman Mitchell Webb made the Eagles pay, smashing a two-run double off the right field wall. In the fifth, the Eagle made it a 2-1 contest when Hunter Thomas led off with his third home run of the year. Webb added his third RBI of the day with a run-scoring single in the sixth for a 3-1 advantage. A solo home run Eagle designated hitter Hunter Thomas made it 3-2 in the fifth and then a two-run single by catcher Chase Griffin put the Eagles ahead 4-3 in the seventh.

Junior right-hander Sean McLaughlin started and went five innings and struck out six before giving way to a trio of relievers. Senior Jared Walsh allowed a pair of runs and sophomore Connor Jones got the loss to fall to 0-1 after walking two and surrendering the two-run single to Griffin. Ryan Frederick tossed three scoreless innings for his first win while Brown notched his third save of the series and fifth on the year.

“It’s very disappointing to lose three one-run games, and the bottom line is we didn’t get it done,” Georgia coach Scott Stricklin said. “We didn’t deserve to win, we had poor at bats in crucial situations and we didn’t play well in our first road trip. You have to credit Georgia Southern because they got the clutch hits and made the pitches when we had our chances.”

Georgia returns to action Tuesday when it plays host to Furman at 5:05 p.m. It will start a season-long 10-game stretch at Foley Field.