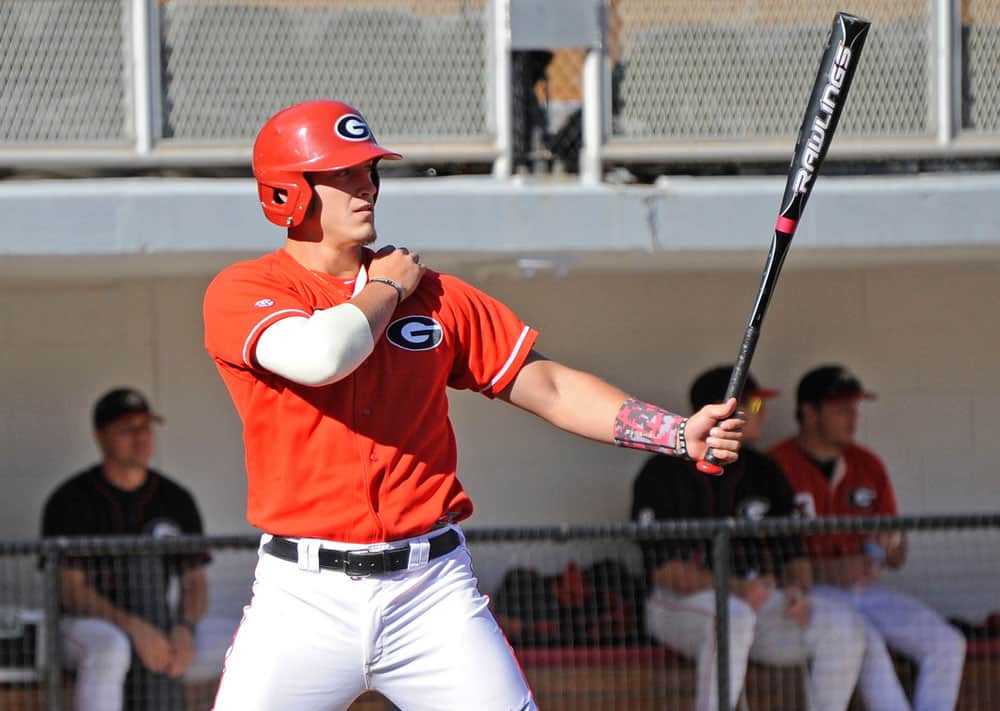 ATHENS, Ga. – Georgia and seventh-ranked South Carolina were tied 5-5 in the top of the ninth when play was halted due to rain Friday at Carolina Stadium.

The game will resume Saturday at 4 p.m., and the second game of the SEC series will follow approximately 35 minutes after the completion of the first contest.

Georgia took a 1-0 lead in the first. Sophomore Skyler Weber drew a one-out walk, took third on a two-out single by junior Daniel Nichols and scored on a wild pitch by Wil Crowe. The Gamecocks tied the game in the third as senior left-hander Jared Walsh struggled with his control most of the night, walking a career-high nine in 5.2 innings. However, the only damage in the third came from Kyle Martin’s RBI-single to make it 1-1. The Gamecocks surged ahead 3-1 in the fourth on a two-out, two-run single by Max Schrock. The Bulldogs responded in the top of the sixth, scoring two runs on four hits to tie the contest. Weber and junior first baseman Zack Bowers (2-for-4, 2 RBI) led off with base hits and later scored on a single by senior Brandon Stephens and an RBI-double by freshman Keegan McGovern.

Walsh entered the contest with an SEC-leading 0.96 ERA and had issued only 11 walks in 28 innings but left with two outs in the sixth. Freshman Bo Tucker inherited a bases-loaded jam, and the first batter he faced was Martin, who notched an RBI on a walk for a 4-3 lead. Then, Tucker battled back to strike out cleanup hitter Elliott Caldwell to keep it a one-run affair.

The Bulldogs answered with a two-out rally of their own in the seventh off USC reliever Vince Fiori, who had an 0.98 ERA on the season entering the series. Junior Nick King reached on a one-out single and sophomore Stephen Wrenn moved him to second when he put down a bunt single. With two outs, Bowers fell behind 0-2, worked the count full and then smashed a two-run double off the wall in left centerfield for a 5-4 lead. The Gamecocks tied the game in the eighth, scoring a run on two hits and two wild pitches by Tucker. USC had a chance to take the lead, loading the bases but Jared Cheek got a strikeout and a groundout to send it to the ninth tied. At that point, the teams had played three hours and eight minutes, and the game went in to a rain delay. Shortly thereafter, the decision was made to halt the game on a chilly, rainy night.

Wrenn (1-for-3) extended his on base streak to all 27 games with a walk in his second plate appearance. Through eight innings, the Gamecocks had left 13 men on base. Neither starter will figure in the decision. Walsh’s final line was 5.2 innings, allowing four runs on four hits with four strikeouts. Crowe surrendered three runs on six hits with seven strikeouts in six innings pitched.