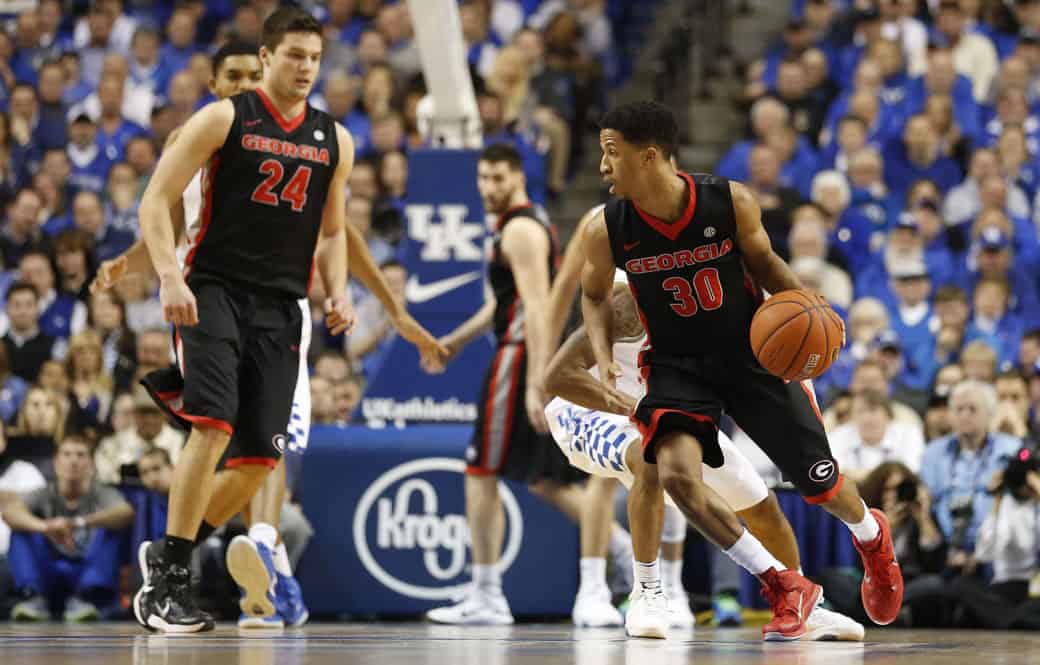 ATHENS, Ga. – The Georgia Bulldogs suffered their second-consecutive loss, 69-58 to the No. 1 Kentucky Wildcats at Rupp Arena in Lexington, Kentucky on Tuesday night.

Georgia was faced with its largest halftime deficit of the season, down 15 at the break, but rallied back to cut the lead to as little as five points with just two minutes remaining. The comeback fell just short, however, as Andrew Harrison and the top-ranked Wildcats were able to remain unbeaten with a 69-58 win over the Bulldogs.

Nemanja Djurisic paced the Bulldogs with 17 points on 7-of-10 shooting from the floor, adding seven rebounds as well. Yante Maten and Houston Kessler each set career highs with 13 and seven points scored, respectively. Kessler made his second-career start, filling in for the injured Marcus Thornton, and Maten chipped in a career-high nine rebounds and 29 minutes off the bench.

“We got off to a tough start,” Georgia head coach Mark Fox said following the game. “We really started the game poorly. We didn’t play very mature in the first half. We turned the ball over too much and dug ourselves a huge hole but we decided in the second half to finally grow up. I felt like we really took a step forward in the second half. We competed and we didn’t turn the ball over a lot and made some great plays on both ends. We were just playing from behind. We got a chance there at the end, and maybe if Nemi’s 3-pointer goes in then you never know what happens. We gave ourselves a chance to win it in the last five minutes and that’s what you hope to do here.”

Kentucky (22-0, 8-0) jumped out to an early 11-1 lead at the first media timeout, connecting on three of its first five field goal attempts and adding three-of-four free throw attempts in the first four minutes of play. Georgia (14-7, 5-4) fought back and narrowed the gap to six on two separate occasions, but Kentucky’s defense proved too much to overcome. The Wildcats forced the Bulldogs to commit 12 turnovers in the first half. Georgia averaged 13.4 turnovers per game entering the contest.

Kentucky nearly doubled the amount of field goals made that Georgia knocked down in the first half, making 17-of-34 compared to Georgia’s 9-of-22. The Wildcats handed Georgia its largest halftime deficit of the season, leaving the Bulldogs down 42-27 at the break.

The Bulldogs battled back, cutting into Kentucky’s lead to make it a seven-point ball game at 56-49 after a 20-9 run that was started by two free throws by Charles Mann and a three-pointer by J.J. Frazier, his first points of the game. Six different Bulldogs scored during the run, which was capped off by a Maten jumper at the 8:59 mark. The two teams would each go scoreless for the next 3:18 until Devin Booker made a breakaway layup at the 5:41 mark to put Kentucky back up 58-49 and forcing Georgia to call a timeout.

The Wildcats and Bulldogs exchanged field goals and free throws for the next two minutes, with Georgia getting to within six points with 4:09 remaining. Georgia later cut the lead to just five points with 2:06 remaining, but Kentucky buckled down on defense and held the Bulldogs scoreless for the final two minutes of play to win the game by a final score of 69-58.

Andrew Harrison scored a game-high, and season-best, 23 points on 8-of-16 shooting and added seven assists while his brother and Kentucky’s leading scorer on the season, Aaron Harrison, was held to just one point. Karl-Anthony Towns was the only other Wildcat to score in double-digits, finishing with 15 points and a game-high 13 rebounds.

· The Bulldogs were without their leading scorer and rebounder in Marcus Thornton for the second-consecutive game since he suffered a concussion vs. Vanderbilt.

· This was the 144th all-time meeting between the two schools; Kentucky now leads the series 119-26. Kentucky is now 58-5 against the Bulldogs in Lexington.

· The teams will meet again in Athens on March 3.

· Kentucky handed Georgia its largest halftime deficit of the season, 42-27.

· Georgia turned the ball over 12 times in the first half, but committed just four turnovers in the final period.

· Georgia fell just short of overcoming a 15-point deficit. The largest deficit the Bulldogs have overcome to win a game in the Mark Fox era is 14 points.

· Houston Kessler scored a career-high 7 points, all coming in the first half.

Georgia will return home looking to return to its winning ways when the Bulldogs host Tennessee on Saturday, February 7. Georgia is 10-1 on the season, and 3-1 in SEC games at Stegeman Coliseum during the 2014-15 season. Tipoff is scheduled for noon and the game will air on ESPN2.