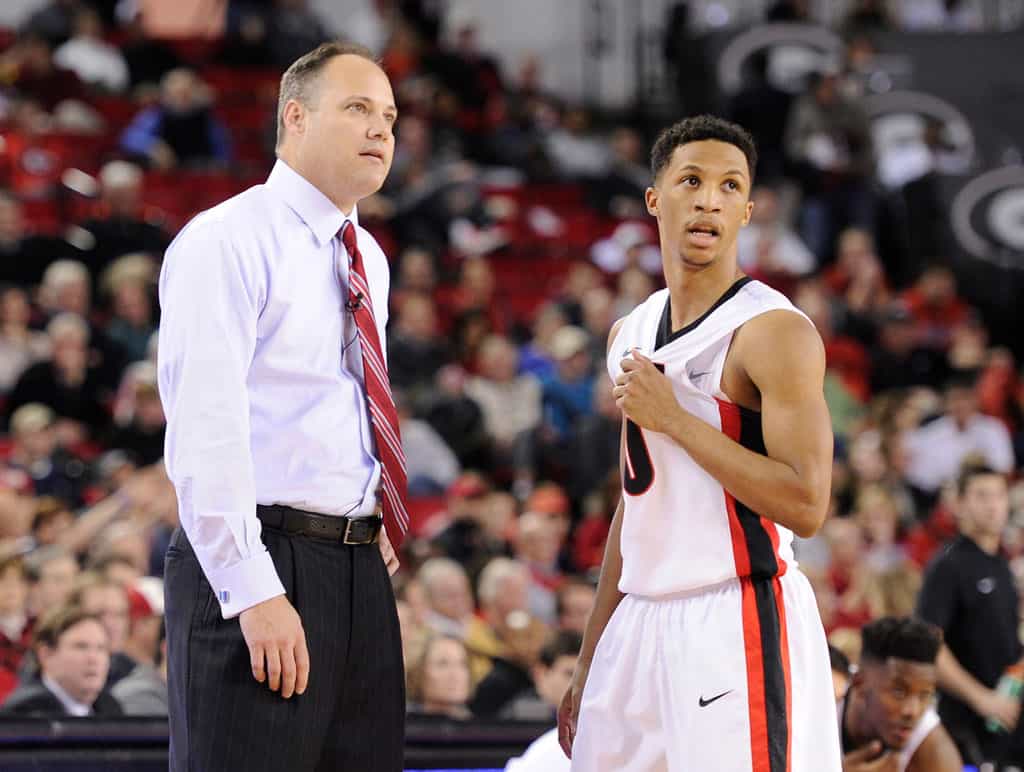 ATHENS, Ga. – Mark Fox earned his 100th victory as the head coach at the University of Georgia with a 56-53 victory over the Tennessee Volunteers at Stegeman Coliseum on Saturday afternoon.

Senior forward Nemanja Djurisic also eclipsed a milestone for his career at Georgia, recording his 1,000th career point as a Bulldog. Djurisic finished the day tied for the team lead with 10 points. Charles Mann and J.J. Frazier each finished with 10 points as well. Senior Marcus Thornton returned to the lineup after missing the previous two contests with a concussion that he suffered against Vanderbilt on January 27. He finished the day with eight points and four rebounds.

As a team, Georgia (15-7, 6-4) shot 55 percent from the field (21-of-38) and hit 7-of-16 3-point attempts. Tennessee (13-9, 5-5) forced the Bulldogs into 20 turnovers, which tied for a season-worst, but the Volunteers were only able to sink 20-of-56 shots from the field. Josh Richardson, the Volunteers’ leading scorer on the season, was held scoreless until the final 30 seconds of the contest, and he finished with just two points on the day.

“Nothing is easy in the SEC,” Fox said after the game. “That was another hard-fought battle. Tennessee has got a very unique team. They play four wing players and they play that zone and they have some quality wins this year. We beat a team that lets us feel like we got a quality win today. It certainly was a hard-fought game and we feel fortunate to win.”

The Volunteers started the game hot, scoring the first six points of the ball game and jumping out to a 10-4 lead at the first media timeout. The Bulldogs responded with a 12-to-5 run to take the lead at 16-15. After Tennessee leveled the game 16-16, Georgia closed the half out on a 13-to-6 run over the final 8:30. Djurisic hit a 3-pointer with 1:14 remaining to give him 1,000 points for his career at Georgia. Thornton finished the half with two free throws to give the Bulldogs a 29-22 lead at the half.

The Bulldogs turned the ball over 11 times in the first half, but shot an astounding 61 percent from the field (11-of-18) to make up for their miscues. It was Georgia’s best shooting half since the Bulldogs shot 64 percent from the field in the second half against Florida on January 17. Tennessee, on the other hand, attempted 10 more field goals than the Bulldogs, but connected on just 32 percent of them (9-of-28).

Tennessee again started the second half hot, tying the game at 31-31 just four minutes into play. The Bulldogs responded quickly as Yante Maten knocked down a jumper on the next possession to regain the lead. Georgia would not relinquish the lead over the rest of the ballgame.

Frazier, who struggled in the first half, found his stroke in the second period, hitting three 3-pointers in a three minute span which gave Georgia its largest lead of the game, up 51-42 with 7:16 remaining.

The Volunteers fought to cut the lead to as little as three with 30 seconds remaining. Frazier hit one-of-two free throws to extend Georgia’s lead to four with 19 seconds on the clock. After a foul was called on Mann, Kevin Punter hit the front end of a one-and-one and missed the second shot. Richardson got the ball with an open look from the top of the key to tie the game but missed it off the rim as time expired, giving Georgia the 56-53 win.

· Marcus Thornton returned to the lineup after missing the last two games due to a concussion he suffered against Vanderbilt on January 27.

· This was the 150th all-time meeting between the two schools, and the only matchup of the 2014-15 season; Tennessee still leads the series by a 93-57 count.

· It was the third-best shooting performance of the season for the Bulldogs, as they knocked down 55.3 percent of their field goal attempts (.633 at Chattanooga, .561 vs. Florida).

· The Bulldogs recorded 16 assists for the third time this season (16 at Georgia Tech, 17 vs. Troy).

· Nemanja Djurisic recorded the 1,000th point of his career on a 3-pointer in the first half. He became the 44th player in school history to reach this milestone, and the first since Kentavious Caldwell-Pope in 2013.

· Mark Fox recorded his 100th victory as the head coach at Georgia. He’s just the fourth coach in school history to reach this milestone.

Georgia hits the road for a Wednesday night matchup against Texas A&M in College Station, Texas on February 11. Tipoff is scheduled for 7:00 p.m. eastern time and the game will air on the SECN.