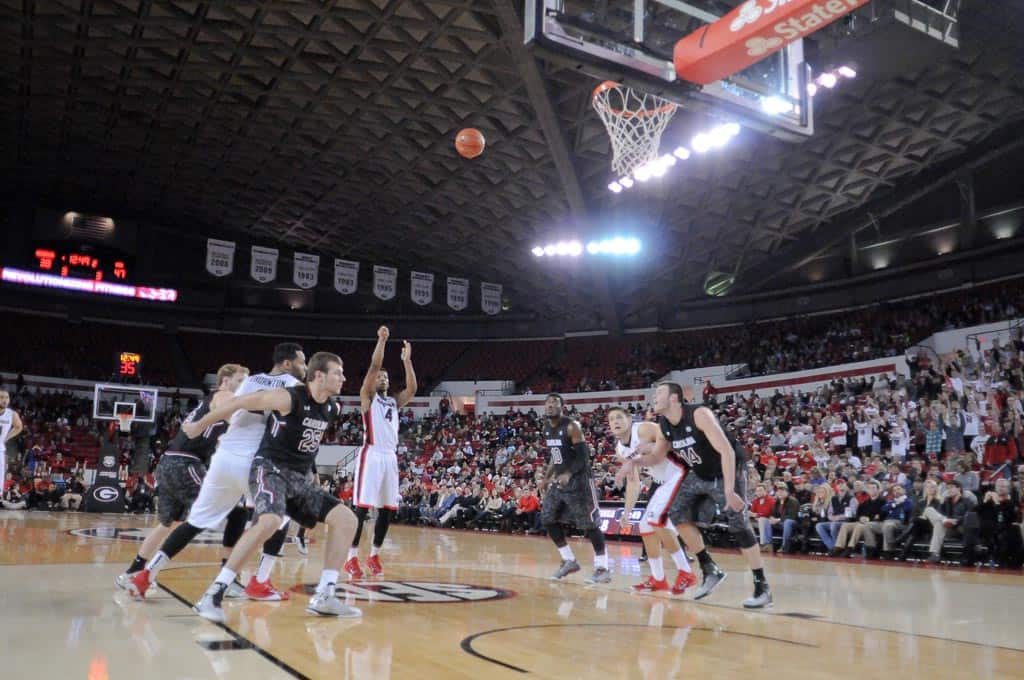 ATHENS, Ga. – Georgia’s comeback bid came up just short, as South Carolina was able to hold on and top the Bulldogs 64-58 in Stegeman Coliseum on Tuesday night.

Georgia (16-9, 7-6) charged back from an 18-point halftime deficit and was down as much as 21 points in the first half to tie the game with 4:31 remaining. However, South Carolina (13-12, 4-9) responded with a 13-7 run to end regulation and preserve the win. The victory gave the Gamecocks their first season sweep over the Bulldogs since 2009.

“Let’s give South Carolina credit,” Georgia head coach Mark Fox said after the game. “They had a much greater determination to do the dirty work to start the game. We dug ourselves an immense hole, we let frustration get the best of us, and we played uphill all night.”

The Bulldogs were held to just 23 points in the first half, the second-lowest total of the year for the opening period and the third-lowest scoring half of the season. Georgia scored just four points through the 10:40 mark of the first half and was held to single digits until the 8:30 mark.

South Carolina started the game hot, scoring 22 points through the 10:19 mark, and shooting 58 percent from the field through the duration of the opening period. The Gamecocks hit 7-of-13 3-point attempts in addition to going a perfect 6-6 from the free throw stripe to help give them an 18-point halftime lead.

Georgia stormed back early in the second half, opening the period on a 10-2 run to cut the deficit to 10 going into the first media timeout. Both teams exchanged baskets through the 10-minute mark until Georgia went on a 10-0 run to tie the game at 51-51 with 4:31 left on the clock.

South Carolina responded with five unanswered to regain the lead. From there, the Gamecocks would answer each of the Bulldogs final seven points with baskets of their own to hang on to the lead, despite shooting just 24 percent form the field in the second half.

Tyrone Johnson and Duane Notice led the charge for the Gamecocks, finishing the night with 17 points each. The two combined to shoot 7-of-12 from 3-point range. Mindaugas Kacinas also finished in double digits for the Gamecocks, tallying 13 points and nine rebounds off the bench.

Charles Mann paced the Bulldogs with 17 points offensively, adding six rebounds and three assists. Kenny Gaines was the only other Bulldog to finish in double digits, totaling 11 points and five rebounds. Marcus Thornton and Cameron Forte each finished with eight points.

· This was the 104th all-time meeting between the two schools, and the second of two matchups in the 2014-15 season; Georgia leads the series 54-50 after the loss.

· This was the first time that South Carolina has swept the season series over the Bulldogs since 2009.

· South Carolina beat the Bulldogs 67-50 on January 31, Georgia’s largest margin of defeat on the season.

· Georgia faced its largest halftime deficit of the season, down 18 going into the break. The Bulldogs were down as much as 21 in the first half, which was their largest overall deficit of the year.

Georgia will take to the road for its next two matchups, stopping first in Tuscaloosa to take on the Crimson Tide on February 21. Tipoff is set for 8 p.m. and the game will air on ESPN2. The Bulldogs will then travel to Oxford for their second matchup against Ole Miss on the year. Tipoff is set for 9 p.m. eastern with the game airing on the SECN. Georgia won the first matchup against Ole Miss 69-64 when the Rebels came to Athens on January 20.