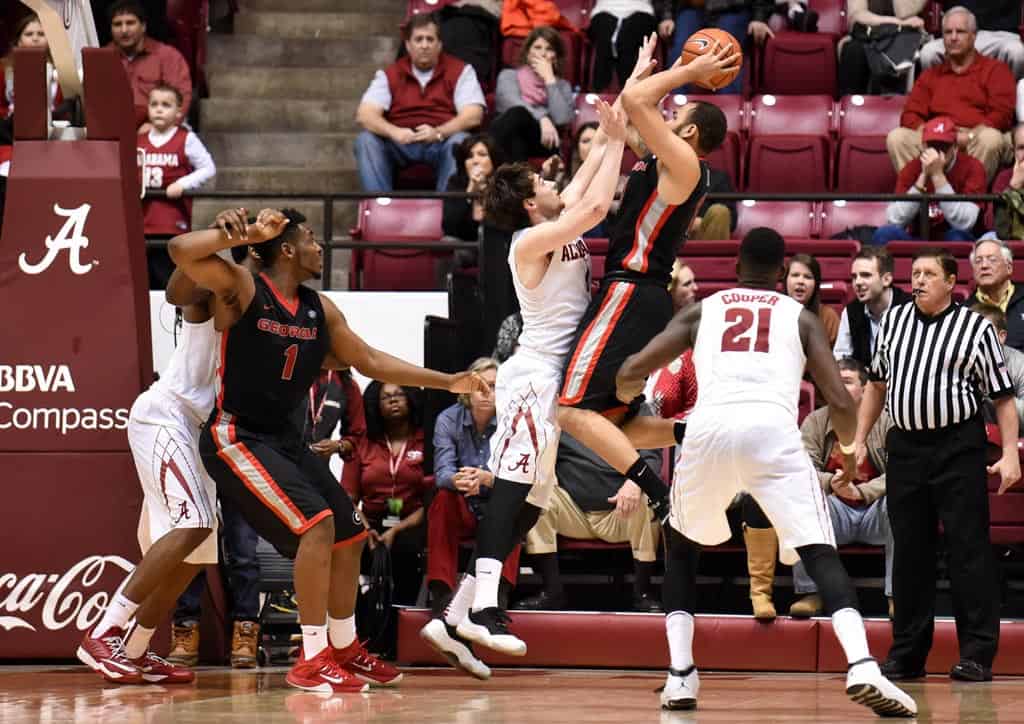 ATHENS, Ga. – The Georgia Bulldogs snapped a two-game losing streak with a 66-65 overtime victory over Alabama in Tuscaloosa on Saturday night.

Georgia (17-9, 8-6) trailed by one point with under 30 seconds remaining in overtime, but Cameron Forte hit a jump shot with seven seconds on the clock to put the Bulldogs ahead by one. Alabama (16-11, 6-8) took the ball up the court and had an opportunity to take the lead, but Georgia blocked the shot attempt out of bounds to seal the win.

Nemanja Djurisic paced the Bulldogs with 14 points on 6-of-10 shooting, adding seven rebounds. Charles Mann was the only other Bulldog to score in double digits, finishing the night with 13 points, making 7-of-8 free throw attempts.

“I’m super proud of our kids,” head coach Mark Fox said after the game. “I really am. That was a hard fought game against a very good team on the road. We’ve faced lots of adversity and I am super proud of those Georgia Bulldogs.”

Both teams struggled from the field in the first half as Georgia connected on just 32.1 percent of its field goal attempts and Alabama hit just 30.8 percent of its attempts. Additionally, neither team could find the stroke from deep as the two schools combined to shoot just 2-of-17 from 3-point range.

Georgia led for almost the entirety of the first half, but Alabama’s defense cracked down in the final seven minutes holding the Bulldogs to just five points over that span. Alabama ended the first half on a 13-4 run to tie the game at 24-24 at the break. Charles Mann led all scorers with eight points in the first half on 2-of-4 shooting while going 4-4 from the free throw stripe.

Both schools traded baskets for the opening portion of the second half, until the 12:50 mark when Georgia opened up a 14-4 run that gave the Bulldogs an eight-point lead with just under nine minutes remaining.

Obasohan then drew a foul with 59 seconds remaining and the Crimson Tide clinging to a one-point lead, but missed both free throw attempts. Georgia took the ball up the court and took the lead on a Thornton lay in with 46 seconds on the clock, putting the Bulldogs up 61-60.

Michael Kessens tied the game on Alabama’s next possession, making one free throw after drawing a foul. The Bulldogs were in position to have the last possession to win the game with 19 seconds remaining but turned the ball over on the inbounds. After a timeout, Levi Randolph was called for an offensive foul that gave the ball back to Georgia with 4.6 seconds on the clock. Kenny Gaines took the final shot of regulation, throwing up a deep 3-pointer at the buzzer that fell short, pushing the game into overtime.

Alabama jumped out to an early lead in overtime, making their first field goal attempt but Georgia quickly responded with two free throws to tie the game on the next possession. The Crimson Tide retook the lead and held Georgia on the ropes, as the Bulldogs trailed by one with under 30 seconds to play and the ball. As the Bulldogs milked the clock, Forte hit a jump shot with seven seconds on the clock to give Georgia a one-point lead.

On the other end of the court, Obasohan looked to give Alabama the lead with a lay in attempt but Yante Maten delivered a huge block for the Bulldogs as the ball went out of bounds with one second remaining. Alabama had a chance to inbound but couldn’t get a shot off as the buzzer sounded, giving Georgia a 66-65 win.

Obasohan led all scorers with 16 points and 12 rebounds. Norris and Rodney Cooper finished with 14 and 11 points respectively.

· This was the 142nd all-time meeting between the two schools. Alabama leads the series 93-49 after Georgia’s win tonight.

· J.J. Frazier returned to action after missing the South Carolina game due to injuries.

· Kenny Paul Geno made the first start of his Georgia career.