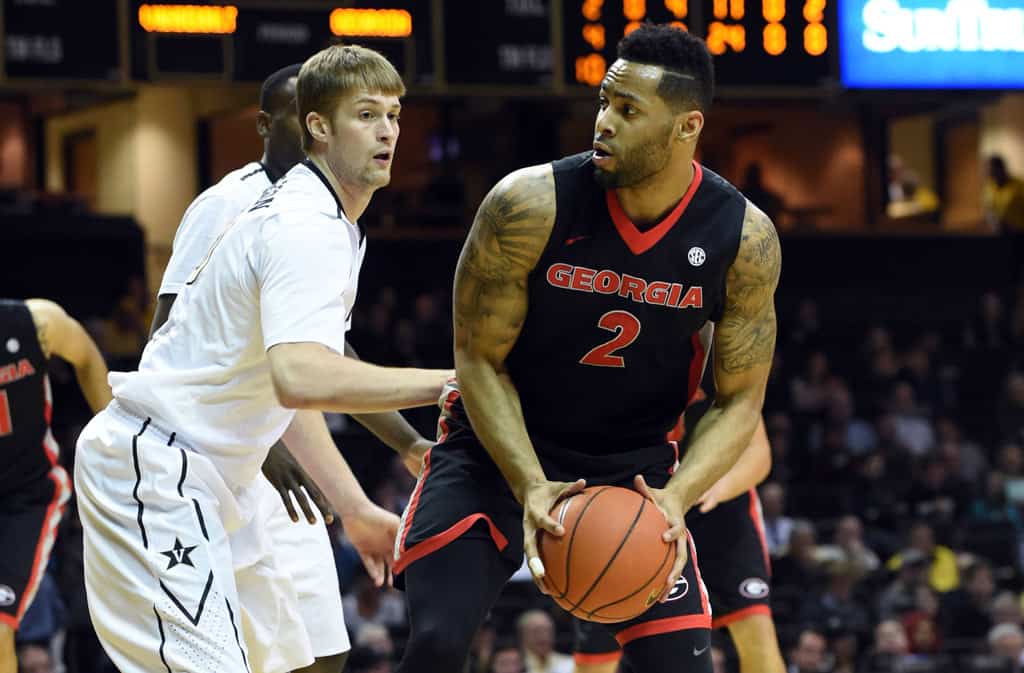 ATHENS, Ga. – The Georgia Bulldogs hung on to earn their first SEC victory of the 2014-15 season, outlasting Vanderbilt 70-67 in Nashville, Tenn. on Wednesday night. It was Georgia’s first win in Nashville since the 2005-06 season.

Kenny Gaines led the Bulldogs in scoring with 17 points, 14 of which came in the second half. Gaines connected on 6-of-8 field goals, including 5-of-7 3-pointers. Marcus Thornton finished with 16 points and J.J. Frazier added 11, including five clutch free throws in the final 20 seconds that proved to be vital in preserving the victory.

“I’m really proud of our young players,” Georgia head coach Mark Fox said after the game. “This was an adverse situation and we had to leave some guys at home, but as I told them after the game, ‘after we lost to LSU some people probably ran for the hills. Some people run for the hills and other people climb it.’ When we were faced with a situation like our kids were tonight, they decided to climb it and I’m very proud of them because we had to play our tails off to win and we did. We beat a good basketball team.”

Georgia (10-5, 1-2) started the game on a 7-0 run through the first four minutes of play, and rode that momentum through the duration of the first half as the Bulldogs took a 31-22 lead into the locker room at halftime. Georgia led wire-to-wire in the first half and was up by as much as 13 at one point.

Georgia started where they left off early in the second half, extending their lead to 51-37 at the 13:46 mark on a Charles Mann layup, however, Vanderbilt kept hanging close and was able to go on a 16-5 run over a 6:30 minute stretch that was sparked by a Wade Baldwin 3-pointer at the 6:59 mark.

Georgia was held without a field goal for the final six minutes of the second half, allowing Vanderbilt to come back from an 11-point deficit, however, the Bulldogs hit 11 consecutive free throws down the stretch, including nine in the final five minutes, to preserve the win.

The Commodores roared back down the stretch, pulling to within two points with under 30 seconds remaining on a Riley LaChance 3-pointer. Charles Mann and J.J. Frazier hit two free throws each to push the Bulldogs back up by six.

LaChance hit two more 3-pointers in the final eight seconds of the game, but Frazier was able to knock down three of his final four free throw attempts to cement the victory.

LaChance finished the night with a game-high 21 points on 7-of-13 shooting. Jones was held to 10 points on just 3-of-10 shooting.

· This was the 138th all-time meeting between the two schools. Vanderbilt now leads the series 19-14, having won each of the last two meetings.

· Georgia was without three significant contributors Wednesday night, as starter Juwan Parker, Yante Maten and Kenny Paul Geno all missed the game due to injury.

· Georgia had a season-low 27 rebounds on the night.

Georgia returns to Athens for a two-game home stand, starting with Florida on Saturday, January 17 at Stegeman Coliseum. Tipoff is scheduled for 2:00 p.m. and the game will be televised on CBS.