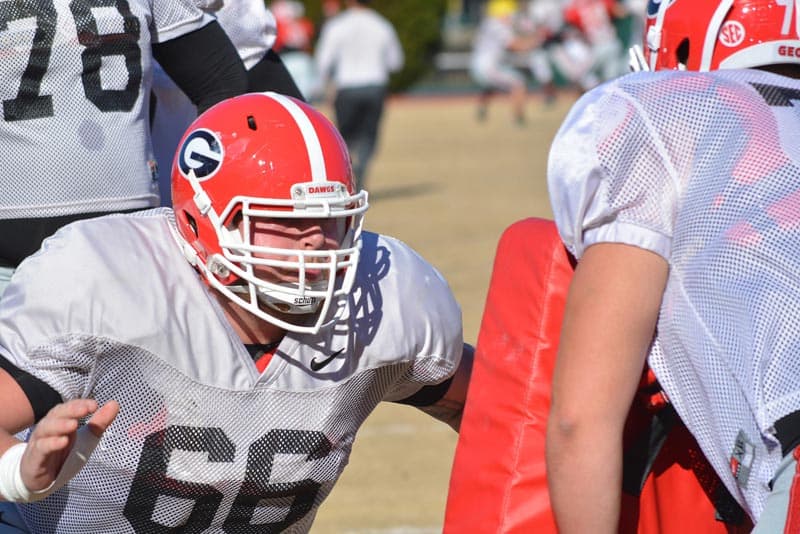 Georgia practiced in full pads and utilized two of the Bucs’ fields. This marked the second of four practices for the Bulldogs (9-3, 6-2 Southeastern Conference) as they prepare for their Belk Bowl matchup versus No. 20 Louisville (9-3, 5-3 ACC) on Dec. 30.

“About 90 percent of the offensive game plan was done before we got here,” said Richt. “It’s obviously different not having Mike around at practice after having him here for so long. But we have a very capable coaching staff who knows that it’s time for us to make sure we take care of business in this game.”

“It’s a little different not seeing Coach Bobo around,” said Bulldog starting quarterback Hutson Mason. “He’s been around last five years while I have been here so now Doug (Saylor), our graduate assistant, and Coach Richt has been running the meetings and Coach (John) Lilly has been running the practice for the offensive side of the ball.”

The Bulldogs feature freshman Nick Chubb as their starting tailback. Junior Todd Gurley started the year as Georgia’s starter but was sidelined with an ACL knee injury during the win over No. 9 Auburn on Nov. 15. Richt said on Friday that Gurley will not be returning for his senior year.

“(Todd) will be moving on to the next level,” Richt said. “He is rehabbing well and is in great spirits. I think he will be doing plenty of drills for the scouts and be a great draft pick for someone.”

Richt also confirmed that freshman receiver Isaiah McKenzie will not play against the Cardinals because of a one-game suspension dealing with “an in-house issue” that did not involve academics.

The team will be participating in a bowl sponsored shopping spree at the local Belk store later in the day Friday. On Saturday, the Bulldogs are scheduled to make a trip to Charlotte Motor Speedway for a drive-along experience at the track.

Georgia’s players and staff will also have the opportunity to enjoy the Charlotte Hornets versus Orlando Magic game on Saturday night.

Georgia takes on Louisville at 6:30 p.m. on Dec. 30 at the Bank of America Stadium. ESPN will televise the first-ever matchup between the two teams.