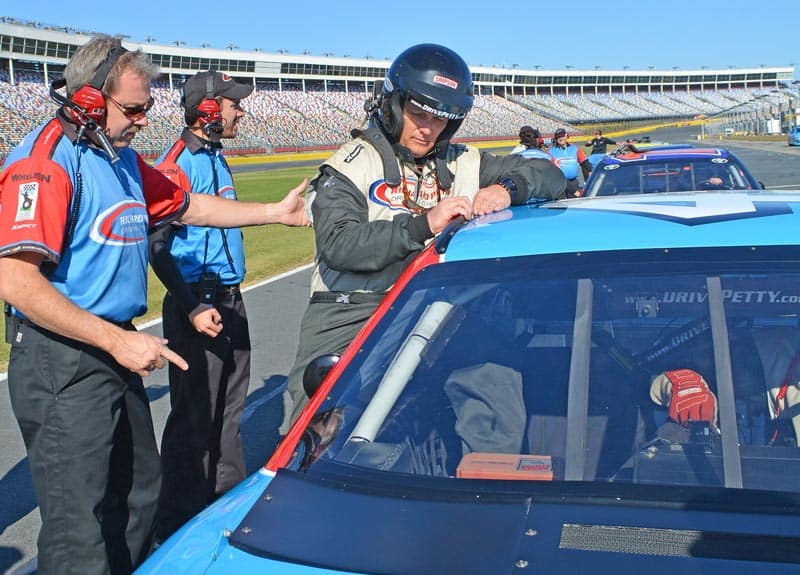 The day began with one of the signature events of the Belk Bowl as both teams were treated to lunch at the speedway followed by a unique, exciting opportunity to ride three laps with a driver from the Richard Petty Driving Experience. The race cars reached speeds in excess of 160 miles per hour.

In the afternoon, the Bulldogs held their third practice of the week at Charlotte Country Day School. The team worked out for two hours under blue skies and temperatures in the low 60s. Then in the evening, the Bulldogs were treated to another team outing, this one at Time Warner Cable Arena as the Charlotte Hornets squared off against the Orlando Magic.

Georgia coach Mark Richt said the energy and enthusiasm from the speedway experience carried over in to Saturday’s practice.

“It was a fun day, when you saw the guys smiling after getting out of the racecars, you knew everybody had a good time,” Richt said. “Then, we had a really good practice. For me going around the track, it was probably between 150 and 160 miles per hour and then another car came up beside us maybe four or five feet away. That was a little too close. I’ve been down on pit row and seen a race, but to be in the car going around, I’ve got even more respect now for the drivers.”

Bulldog senior linebacker Amarlo Herrera was one of the first Bulldogs in line for the racing experience but then had second thoughts and opted not to do it.

“I was right there and watched one lap and said I don’t want any part of it and walked away,” Herrera said with a smile. “The guys who did it said it was fun, and then we had fun at practice. It’s been a good time.”

“It was fun riding in the car going about 160 or 170 miles per hour,” senior defensive back Damian Swann said. “We try not do that in our own car. We had good energy in practice today, really it’s been good all year.”

On Sunday, Georgia is slated to visit the Second Harvest Food Bank and Levine Children’s Hospital in the morning followed by its final practice of the week in the afternoon. A highlight of Sunday’s schedule for the team will be a dinner at Chima Brazilian Steakhouse.