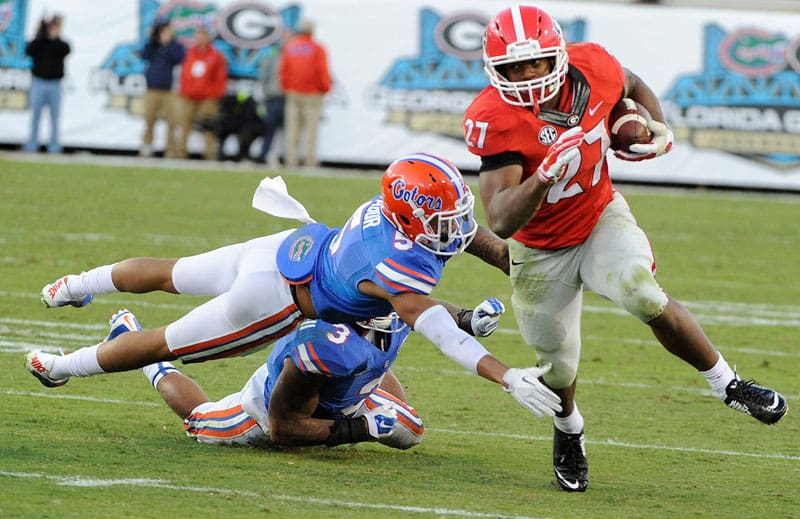 Despite the suspension of star running back Todd Gurley, UGA seemed to have things trending back in their favor. They only needed to win the next two games, and they would be in the heat of the national championship hunt. With a rested Todd Gurley and a doable schedule, the sky was the limit.

One problem: The Bulldogs were a no show for the “World’s Largest Outdoor Cocktail Party” once again. This game was supposed to be the nail in the Florida Gators head coach Will Muschamp’s coaching coffin. Unfortunately for Bulldog nation, the Gators didn’t get the memo as they defeated the Bulldogs 38-20.

Here are my five takeaways from that game.

1. Todd Gurley was missed, but not in the obvious way

Gurley is the best running back in college football. However, Nick Chubb was very good with 215 total yards and two touchdowns. Yes, Georgia would have been better on offense with Gurley, but that is not where they missed him the most.

Georgia needed Gurley’s leadership, and it wasn’t there.

2. The horrific play of the defense was a product of the inefficient offense

The defense was not bad in the first half. They gave up 14 points, but those two touchdowns were the product of a fake field goal and an unintentional pick by the referee.

Without those two plays, the Bulldogs only gave up 122 total yards in the first half. However, in the second half, the defense collapsed and gave up 445 total yards.

However, when facing a run-heavy offense, you’re reliant on the offense not stalling and putting you right back on the field. The Georgia offense did just that during the second and third period, and that was the difference in the game as they were outscored 24-0.

3. David Andrews injury was a game-changer for the offense

Offensive linemen are the unsung heroes in the game of football. Sometimes it is not till one gets injured that you understand how valuable they are. Andrews is the anchor of the offensive line. Much like his predecessor Ben Jones, he is the emotional leader as well.

Georgia never looked the same after he went down, and it did alter the game plan for the Bulldogs. Like a warrior, Andrews tried to play, but when Hunter Long was in the game, the Gators feasted on him.

Players are always told to be ready to be the next man up. However, it is much more difficult to do when called upon in a difficult situation. Long will have better days ahead.

4. UGA now has an uphill battle to get back to Atlanta

Despite what we saw today, Gurley and Chubb together should be an unstoppable offense. Despite what the box score states, the defense is improving. So it is not a stretch to think they can win out.

Missouri’s offense is still sputtering, so additional losses are not outside the realm of possibilities. However, nothing on their schedule is a guaranteed loss.

Is it possible that the Missouri Tigers will go to back-to-back SEC Championship Games?

5. Mark Richt coached teams do not show up for this game

Let me start by saying that no one has been a bigger supporter of Mark Richt than me. Moreover, I am still not ready to jump off his bandwagon just yet. However, he is now 5-9 in this crucial rivalry game.

Supporters will argue that UGA just won three in a row in the WLOCP, but a closer examination tells the truth. Georgia never wins this game with an inferior team, and even when they win with a superior team, it is a struggle.

In the previous three wins against Florida, the Bulldogs should have won by multiple touchdowns. However, it is a struggle to the final drive. Some will argue that it’s because it is a rivalry game. I get that to an extent, but not 14 years worth of it as an excuse.