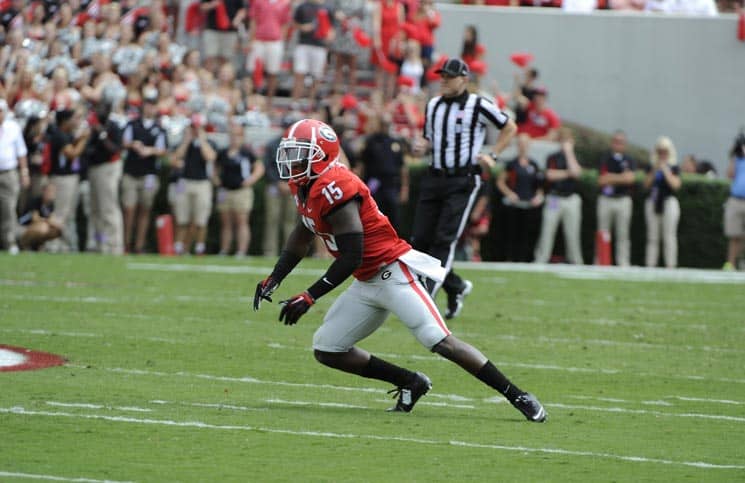 ATHENS, Ga. – A day after storms swept through the Southeast, the 10th-ranked Georgia Bulldogs conducted a two-hour workout Wednesday in cool, dry conditions.

Georgia coach Mark Richt said the latest practice was productive as a Southeastern Conference road game with Arkansas is on the horizon.

“We had another outstanding practice,” Richt said. “It cooled down a bit, and we were on the FieldTurf again because of the rain and the grass is still soft, but we’re playing on FieldTurf so it’s not all bad.”

Richt was asked about the status of injured junior running back Keith Marshall, and he said while Marshall is getting better, he’s doubtful for the upcoming game. Marshall injured his leg in the win over Troy on Sept. 20 and has missed the last three contests. To help shore up depth at that position, the Bulldogs have moved sophomore safety J.J. Green to running back this week.

A 5-9, 183-pound native of Kingsland, Ga., Green appeared in 13 games as a running back last year including making two starts. He made the move to the secondary during spring practice and has played in five games with one start this season.

“J.J. realizes it’s a short-term thing, and he said if he can help the team out, then let’s do it,” Richt said. “He’s a sharp guy who recalls things we were trying to do in the past and learning quickly what we we are doing this year.”

The Bulldogs own a 9-4 edge in the series history. The first four meetings between the two schools came in bowl games. Saturday will mark Georgia’s first game in Little Rock after going 4-0 against the Razorbacks in Fayetteville. The Razorbacks joined the SEC in 1992, and since then the Bulldogs are 7-2 in the series.