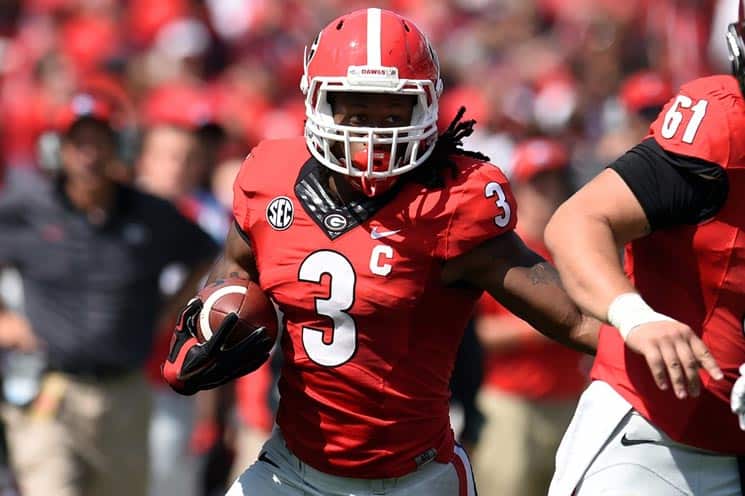 This morning on Twitter, Clay Travis tweeted a picture of today’s Tennessean with a column titled “Vanderbilt confident it can handle Todd Gurley.” Dawg Nation chuckled in unison.

Most delusional belief in the SEC this season? I think so. pic.twitter.com/WW4m3sUCkC

The article can also be found at  Tennessean.com. Here is the main quote:

“Todd Gurley is just another running back in the SEC we’re going to have to tackle,” Vanderbilt linebacker Caleb Azubike said. “I feel like given the strength and given the size of our defense we are going to be able to handle that quite properly.”

This is the type of quote that usually gets turned into bulletin board material. But it goes without saying, Todd Gurley doesn’t need that kind of motivation.

“He’s averaging (152) yards a game, arguably the best running back in college football, and he does it as good as anybody,” Mason said. “He’s a downhill runner, great vision, he’s strong. He reminds me of Adrian Peterson. I had a chance to see him (Peterson) up close, and when you watch Gurley on film he’s physical, he breaks tackles. He’s facing nine-, 10-man boxes every week and he’s productive, so it starts and ends with him.”

“It starts and ends with Gurley,” Mason said, “so that’s where we have to start defensively.”

Vanderbilt did an incredible job on Gurley last season in Nashville, holding the All-SEC tailback to 0 yards. Oh wait, he was injured and didn’t play.

Former Vandy head coach James Franklin upgraded the roster since that game, but Derek Mason’s 2014 team is still average in run defense. The Commodores have surrendered 807 yards on the ground in five games (161.4 per game).

Unless the game gets out of hand early, expect Todd Gurley to again rush for over 100 yards and score a couple of TD’s.