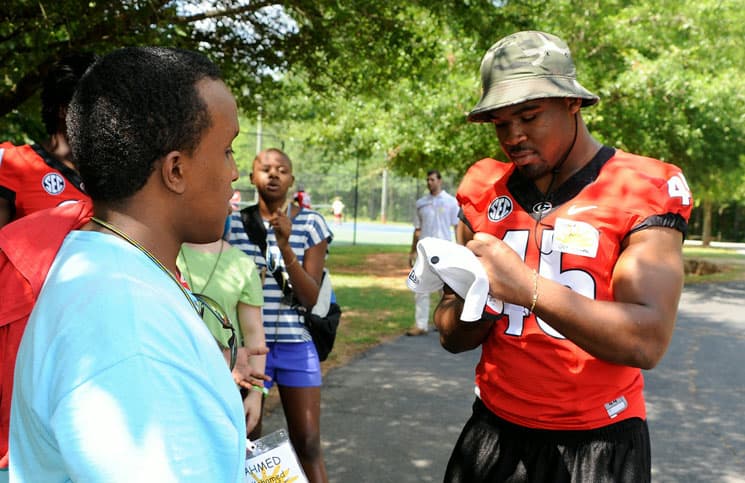 ATHENS, Ga. – Sixteen University of Georgia student-athletes were inducted into UGA’s Student-Athlete Leadership Academy (L.E.A.D.) during a ceremony on Monday evening in the Richard B. Taylor Room in the Coliseum Training Facility.

This marks the fifth year of the L.E.A.D. program after 11 student-athletes were inducted in 2013, 17 in 2012, 20 in 2011, and 26 in the inaugural class in 2010. Among the prestigious group of past inductees are six-time Olympic gold medalist swimmer Allison Schmitt and Kansas City Chiefs quarterback Aaron Murray.

Inductees are chosen based on academic and athletic success, leadership, campus and community service involvement, and recommendations of head coaches and academic counselors.

“The Leadership Academy provides an outstanding opportunity for a select group of our student-athletes to further their leadership journey,” said J. Reid Parker Director of Athletics Greg McGarity. “These students are highly motivated and engaged in the total collegiate experience, and we are proud to have them represent UGA and the Athletic Association.”

“L.E.A.D. gives us an opportunity to recognize and foster development for those student-athletes who do what we ask them to do,” said Executive Associate Athletic Director and Senior Woman Administrator Carla Williams, who was instrumental in the launch of the program in 2010. “We want them to have the opportunity to be leaders in the classroom, in the community, in their sport, and among their peers.”

Along with encouraging leadership development and providing resources to compete for awards and scholarships, the student-athletes will have a chance to meet with local, state and industry leaders. It is one of the program’s goals to have the student-athletes visit a company where superb leadership has had a visible impact on the organization and/or surrounding community.

Additionally, these student-athletes will be provided with resources to be competitive for conference and national awards and postgraduate scholarships, such as the NCAA Top VIII award, NCAA Woman of the Year award, and the SEC H. Boyd McWhorter Postgraduate Scholarship. L.E.A.D. participants will also have the opportunity to compete for a highly coveted graduate assistantship position within the UGA Athletic Association.