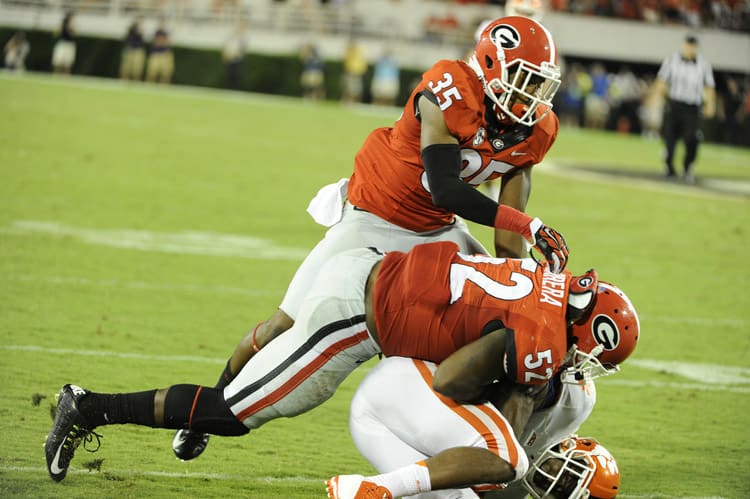 ATHENS, Ga. – Georgia junior tailback Todd Gurley and senior inside linebacker Amarlo Herrera have been awarded Southeastern Conference weekly honors following the Bulldogs’ 45-21 win over #16 Clemson, according to a league announcement on Monday.

Gurley was also named the Walter Camp National Offensive Player of the Week on Sunday for his performance.

Gurley, a Tarboro, N.C., finished with a school record 293 all-purpose yards (former record 290, Rodney Hampton, 1987) and scored four touchdowns to help down the Tigers 45-21. He finished with his 14th career 100-yard rushing game after going for a career-high 198 yards and three scores on just 15 carries (13.2 average). His final carry was a 51-yard touchdown midway through the fourth quarter.

Gurley also tied an NCAA record by returning a kickoff 100 yards for a touchdown. This marked his second career 100-yard return for a score after he returned one against Buffalo during his first game as a Bulldog.

Herrera, an Atlanta, Ga., native, tied his career high and posted his ninth career game with 10-plus tackles after recording 12 stops. His performance included two sacks and 3.5 tackles for loss. Herrera anchored a defense that held the Tigers scoreless in the second half and to just 15 yards of total offense in the final two quarters.

Herrera led a defense that featured a new defensive coaching staff and three new starters in their first game together.