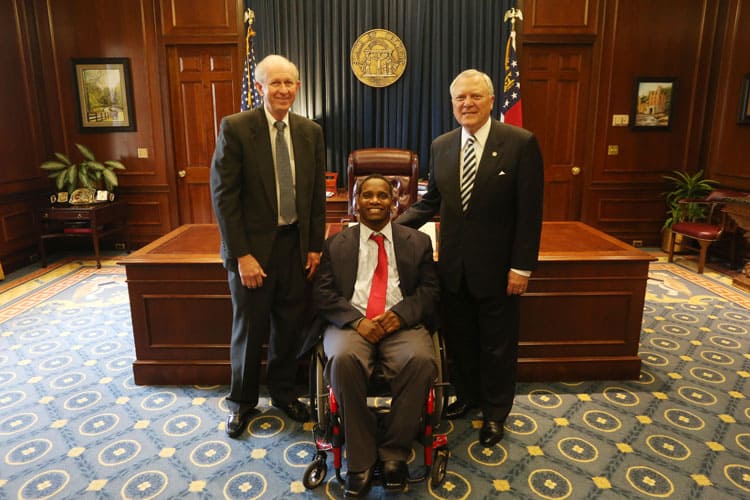 The governor swore in Taylor earlier this week at the state capitol in Atlanta. The GVRSB is part of the Georgia Vocational Rehabilitation Agency (GVRA), and the organization’s goal is to “make Georgia the very best State in the Union for persons with disabilities regarding employment and independence.”

Louise Hill, who is a public service and outreach faculty member of UGA’s J.W. Fanning Institute for Leadership Development, serves on the GVRSB and recruited Taylor.

“I’ve known Louise Hill for a while, and she asked me if I wanted to be nominated for the board because they need some younger people with my perspective,” Taylor said. “I thought about it and felt like it would a good thing to help out. I could provide input from my generation. She said I still had to be appointed by the governor, and I was excited when I got the call. I went down to the capitol and I was like ‘wow,’ I’m getting sworn in by the governor.”

The GVRA is in its third year as a state agency, and their stated mission is to help individuals with disabilities become competitively employed and participate fully in their communities.

Taylor graduated from the University of Georgia in December 2013 with a bachelor’s degree in Consumer Economics. Recently, he passed the exam to be qualified to be a life insurance agent and now has turned his sights on the Series 65 Exam which will allow him to act as an investment advisor. Taylor has been under the guidance of Active Financial Group in Kennesaw.

Taylor was a three-year letterman on the baseball team who appeared in 117 games before sustaining a spinal cord injury in March 2011 while playing for the Bulldogs. He posted a .312 career batting average with 36 stolen bases and was a 33rd round draft pick of the Texas Rangers. After extensive rehabilitation at the Shepherd Center in Atlanta, he returned to UGA in January of 2012 to complete his degree. Taylor received the Courage Award from the Tempe Sports Foundation in 2012 along with the 2013 UGA Inspiration Award.

Taylor resides in Kennesaw and said he is looking forward to contributing to the monthly meetings as a member of the GVRSB.