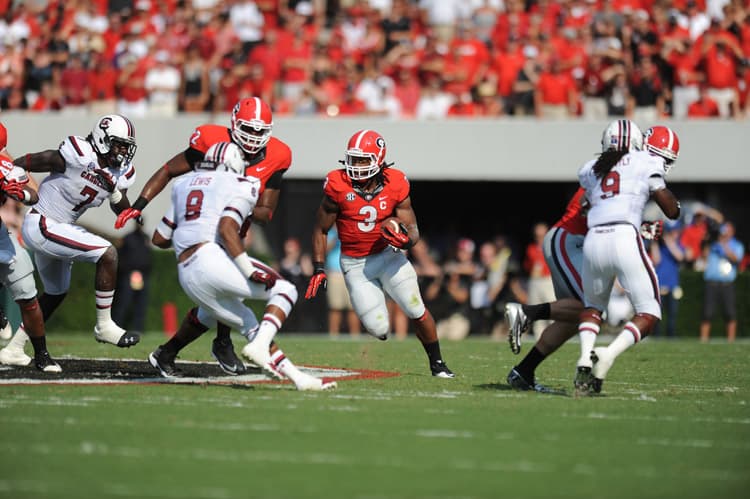 The Georgia Bulldogs made a huge statement in week one by defeating nationally ranked Clemson 45-21. It was their first season opening win over a nationally ranked team since 2005. That also happens to be the last time they won the SEC Championship.

After an off week, another major hurdle awaits Mark Richt and company. The now must travel to Columbia, South Carolina and face a desperate team in front of a hostile crowd.

The last time the Bulldogs traveled to Williams-Brice Stadium they experienced one of the most embarrassing losses in the Mark Richt era. Despite being ranked No. 6 in the nation, the Bulldogs were dismantled by South Carolina 35-7.

Will this time be different or is the Bulldogs nation in for another major letdown against the Old Ball Coach?

Why South Carolina Can Win This Game

Despite the horrific start for the Gamecocks, South Carolina still has plenty of talent on campus. Most notably, of course, is running back Mike Davis. The running game for the Gamecocks has been a disappointment so far this season, but word is that Davis is getting healthy and nearing his form from last season.

The biggest weakness for South Carolina this season has been the secondary. With very little experience and depth, the Gamecocks are allowing 416 passing yards per game. Moreover, opponents are completing almost 72 percent of all of their passes.

Fortunately for South Carolina, the Bulldogs are without possibly their two biggest homerun threats on the outside in Malcolm Mitchell and Justin Scott-Wesley. In my opinion, their absence is why Hutson Mason didn’t throw very many deep balls against Clemson in week one.

If Georgia is unable to make big plays in the passing game, this will allow South Carolina to out-number them in the box with the hope of slowing down the running game.

The Bulldogs need to be able to score points, something they haven’t done at William Brice-Stadium in many years. In fact, 1994 was the last time the Bulldogs scored over 21 at WBC.

You can’t talk Georgia football and not mention the most complete SEC running back since the 80’s in Todd Gurley. He is one of those rare players, if healthy, that can will a whole football team to victory.

As mentioned above, the Bulldogs are without a few key weapons with Mitchell and Scott-Wesley. However, don’t forget that Michael Bennett and Chris Conley are two of the best wide receivers in the SEC.

On defense, the Bulldogs linebackers should be able to wreak havoc on South Carolina quarterback Dylan Thompson. Make no mistake about it, Thompson is very good at going vertical in the passing game.

He has missed several passes this year with some of them being sky-high above the receivers head. He has been very inconsistent in the short and intermediate passing game. If Jeremy Pruitt’s crew can get a consistent pass rush, it would make it difficult for Thompson to use his five and seven step drops, which he looks most comfortable.

Georgia needs someone to step up in the vertical passing game. That is not to say Conley and Bennett can’t, but they need to be allowed to do what they do best. The Bulldogs still have plenty of burners and this would be a great chance for someone like Reggie Davis, Isaiah McKenzie or maybe even Sony Michel to step up to the plate.

However, my biggest x-factor is going to be the number two-option behind Gurley. I love Keith Marshall and believe he will be back to 100 percent by the end of the season. However, in week one he played like a guy coming off a torn ACL.

The Bulldogs cannot allow this to be a game where they wait for him to get going—save that for Troy, Instead, if Marshall still looks a step-slow, they must bring in Nick Chubb early. The offense stalled in the red zone with every one but Gurley and Chubb in week one.

While it is true that Chubb is a true freshman playing in his first road game, he has the physical running style needed in this game when Gurley gets a breather. The Bulldogs must score touchdowns, not field goals in this game.

In seasons past, this is a game that the Bulldogs show up flat and lose this game against an inferior team. However, things seem to be different now for UGA. Perhaps I am just drinking the Kool-Aid, but there seems to be a different mindset for this team.

Mark Richt has said this will be a “bloody” game and I agree. However, the more physical this game is, the better the chances are for the Bulldogs to get the win. I expect both Hutson Mason and Todd Gurley to be more active in the first half.

I expect South Carolina to stack the box and Mason to loosen them up. By the fourth quarter Georgia will make South Carolina quit and Gurley will put it away in his second Heisman statement in as many games.