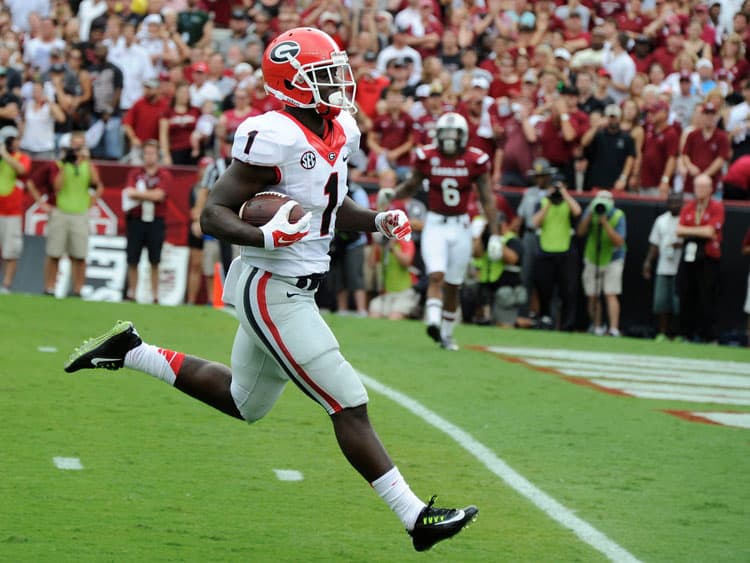 ATHENS, Ga. – The No. 6 Georgia Bulldogs fell to the No. 24 South Carolina Gamecocks 35-38 at Williams-Brice Stadium in Columbia, S.C., on Saturday in front of a sellout crowd of 84,232 and a nationally televised CBS audience.

Georgia drops to 1-1 (0-1) on the season, while South Carolina improves to 2-1 (1-1). The loss moves Georgia to 47-17-2 in the all-time series against the Gamecocks and marks the third straight game in which the Bulldogs have fallen in Columbia. Georgia last won at Williams-Brice in 2008.

Junior tailback Todd Gurley posted his second-straight and 15th career 100-yard rushing game with a 20-attempt, 131-yard rushing effort on the evening. Gurley had a long of 40-yards and found his way into the end zone on a 2-yard run in the third quarter.

Senior quarterback Hutson Mason led the passing attack for Georgia and went 16 of 22 for 191 yards and two touchdowns. Freshman running back Sony Michel was on the receiving end of the first touchdown and junior tight end Jay Rome caught the second. Senior Chris Conley led all Bulldog receivers with 4 receptions for 49 yards.

South Carolina received the ball to start the game and embarked on a 9-play, 75-yard drive that culminated in a 10-yard touchdown pass from Dylan Thompson to wide receiver Shaq Roland. Georgia then took just two plays to tie things up 7-7 at the 10:02 mark. Senior quarterback Hutson Mason hit freshman Isaiah McKenzie for a 36-yard gain before finding freshman running back Sony Michel on an underneath route for a 33-yard touchdown.

A South Carolina fumble on the ensuing drive then gifted Georgia possession at the Gamecocks’ 26-yard line but the Bulldogs were forced to settle for a 36-yard Marshall Morgan field goal as they took a 10-7 lead midway through the first quarter. The field goal set an SEC record for most consecutive field goals made.

The Bulldogs thought they had forced another turnover on South Carolina’s next offensive series, but a Devin Bowman interception was negated by a pass interference call on the third-year defensive back. Thompson found Pharoh Cooper just three plays later for an 8-yard touchdown pass that gave the Gamecocks a 14-10 lead.

Penalties cost Georgia again as a 54-yard Todd Gurley touchdown run on their next drive was cancelled out by a holding call. The Bulldogs were forced to punt and South Carolina took over possession to start the second quarter but went three-and-out before punting the ball back to Georgia.

An unsportsmanlike conduct call on the Gamecocks helped extend the Bulldogs’ ensuing drive but a red zone stand by South Carolina’s defense forced Georgia to settle for a 26-yard Marshall Morgan field goal.

Up 14-13, Thompson led the Gamecocks on a 10-play, 75-yard drive that was capped-off by an 18-yard touchdown pass to Rory Anderson with 5:34 remaining in the first half. After Morgan missed his first field goal in 21 straight attempts on Georgia’s next possession, South Carolina moved into field goal range and used a 32-yard kick by Elliott Fry to take a 24-13 lead into the break.

Georgia received to start the second half and used a heavy dose of Gurley to quickly move the ball into South Carolina territory. The junior tailback ripped off a 40-yard run and converted a fourth-and-one before punching the ball into the end zone on a 2-yard rush to cut the Gamecocks’ lead to 24-20. The Georgia defense was unable to make a stop on South Carolina’s next possession, though, as the Gamecocks’ regained their 11-point advantage through a Thompson touchdown run with 5:07 left to play in the third.

After punts by both teams, Georgia moved the ball inside the South Carolina 10-yard line through a pair of 17 and 23-yard runs by Gurley and Nick Chubb, respectively. Mason then found Jay Rome for a 5-yard touchdown pass and used a completion to Michael Bennett on the subsequent two-point conversion to cut the Gamecocks’ lead to 31-28 with 14:55 to play.

A long return by Shon Carson on the resulting kickoff set the Gamecocks up at their own 42 to start a touchdown drive that culminated in a 24-yard touchdown run by Brandon Wilds. With South Carolina up 38-28 at the 13:01 mark, the Bulldogs used a series of rushes by Quayvon Hicks to move into opposition territory and cross the goal line from a yard out on their next drive. The 11-play, 75-yard drive took 5:51 off the clock and put the score at 35-38.

The Georgia defense then got the turnover it so desperately needed when Damian Swann picked off Thompson on third-and-ten at the Gamecocks’ 24 and returned the interception all the way to the South Carolina 6-yard line. However, the Bulldogs could not capitalize on offense and Morgan missed his potential game-tying kick just inches wide of the upright.

South Carolina then used a key conversion on fourth-and-inches at the 49 yard line to run out the remaining 1:26 of the clock and hold on for the 38-35 win.

The Bulldogs will now return to Athens next weekend to face Troy at Sanford Stadium. Kickoff is scheduled for noon EST and coverage will air on the SEC Network.

On game in general
I’m sure that was a fun game to watch once it got started, especially if you are a South Carolina fan. Hats off to the South Carolina program and the job they did. I think they definitely played hard; they wanted to win, obviously. I think they played hard enough to win. We just didn’t seize the moment, especially with that big turnover deep in territory and get zero points out of it. Very disappointed. No matter what happened throughout the day, that was a moment where we had a chance to, at worst, tie it up. It’s one of the things that got us.

On postgame conversation with kicker Marshall Morgan
I didn’t say anything to him, not that I was ignoring him, but you just go on to the next play pretty much. I didn’t get a chance to see him in the locker room. He broke an SEC record for most kicks in a row and then misses a couple which is not normal for him. I was watching pretty close, I didn’t see anything. I didn’t see an issue with the snap or the hold. It looked fine. One of them looked like it went almost right over the top of it. Obviously the officials thought it was out and I’m not really questioning that but usually he’s right down the pipe and there’s not much drama when he goes back to kick. He’ll get back on track. He’s a great kicker.

On South Carolina’s success in the passing game
Part of the problem was we didn’t put much pressure on the quarterback. We didn’t even squeeze the pocket as far as I could see. He had a lot of time to stand back in there and size up and hit it. There were some times where we had tight coverage and he made nice throws; we just didn’t cover well enough. They got a little bit better in the second half; we tried to pressure a little more in the second half because we just weren’t getting much from the four-man rush. Their offensive line did a nice job.

On Gamecocks offense
Yeah, you know, we didn’t execute to the best of our ability and it always comes down to us. We let him [Dylan Thompson] sit back there and swing it around and anybody could have made those throws if we don’t execute.

On why the South Carolina receivers were running free
Yeah, you know, it’s a lot of things. They didn’t let us rush as good and they gave him a lot of time to get guys open. But you know, we are going to learn from this game – it’s never over.

On why the Gamecocks won
Better execution. I don’t know what our numbers were in the second half, I assume we were a little better. In the first half part, I don’t think we got one first down.

On when Marshall Morgan lined up field goal to tie
Yeah, I mean Morgan has been clutch his whole career, so we had full confidence in him.

On setting the SEC record with 28 in a row and then missing two
Yeah, I mean, I don’t know, it just didn’t go our way.

On the most frustrating part of the loss
It just started from the beginning. We had to wait a lot of time for the game to start and then once it started things kind of didn’t go our way at first. I mean, we had a chance to win it, and we could have, but odds were in their favor, I guess.

On his reverse of field for a 17-yard gain
I just knew we needed a first down and wanted to do everything in my will to get that first down – seeing it back side, I just ran.

On the Gamecocks’ offense
They were giving us a lot of formations, a lot of motion, and it was a lot of stuff to throw us off, but we adjusted pretty well. Really, we still have got to execute, because we had a great game plan, we got to execute better.

On the rest of the season
Oh, it’s still early, it’s still early. We’ll keep trucking. This is in the past now, and we are not thinking about this from here forward. Our dreams and goals are still open for us.

*Morgan Sets SEC Record And Then Misses Two: In the first quarter, junior Marshall Morgan (PK) set an SEC record for Most Consecutive Field Goals Made when he connected for his 19th straight, this latest covering 36 yards. The streak began last season, and the old mark was 18 by Fuad Revieiz (Tennessee, 1984). Then, he added a 26-yarder in the 2nd quarter today to extend the streak to 20. Later in the 2nd quarter, he missed a 44-yarder to snap the streak and then missed a 28-yarder with 4:24 left in the 4th quarter with Georgia trailing by three. Morgan led the SEC last year by going 22-for-24, hitting on his last 17. He made one in the 2014 season opener versus Clemson. His 28-yard miss was the first of his career from the 20-29 range. Before that, he was 12-for-12 from that range.

*A Look At Gurley: Junior Todd Gurley (TB) finished with 131 yards on 20 carries and 1 TD plus four catches for 4 yards. It was his 15th career game with 100+ rushing yards. In the first half, he had 44 rushing yards on eight attempts. For his career, Gurley now has 2,703 rushing yards which ranks 5th in school history. Also, he has 38 career TDs, which ranks second behind Herschel Walker’s 52.

*Firsts: On Georgia’s first drive, it took just two plays to score, needing two completions to go 69 yards for a game-tying TD. It was capped by a 33-yarder to freshman running back Sony Michel from senior Hutson Mason. It was Michel’s first career TD, and Mason’s first TD pass of the season. Also, it was the first TD pass by the Bulldogs at USC since 2004, David Greene to Reggie Brown, in a 20-16 Bulldog win. Freshman Lorenzo Carter (OLB) notched his first career fumble recovery. Junior TE Jay Rome notched his first TD catch since the 2012 SEC Championship game versus Alabama.

*Points of Turnovers: Georgia got 3 points off two turnovers. In the first quarter, freshman Lorenzo Carter (OLB) pounced on a Mike Davis fumble at the USC 26. It led to a 36-yard FG and a 10-7 advantage. Senior Damian Swann notched an interception with 5:24 left in the contest and returned 18 yards to the USC six. It led to a 28-yard missed field goal. It was Swann’s 5th career interception.

*Wilson Leads All Tacklers: Senior Ramik Wilson (ILB) led all defenders with 13 tackles including 2 TFl. He led the SEC last season with 133. Senior Amarlo Herrera (WLB) was next with 11 stops.

*On Deck: The Bulldogs (1-1) return to action next Saturday and play host to Troy at noon on the SEC Network.