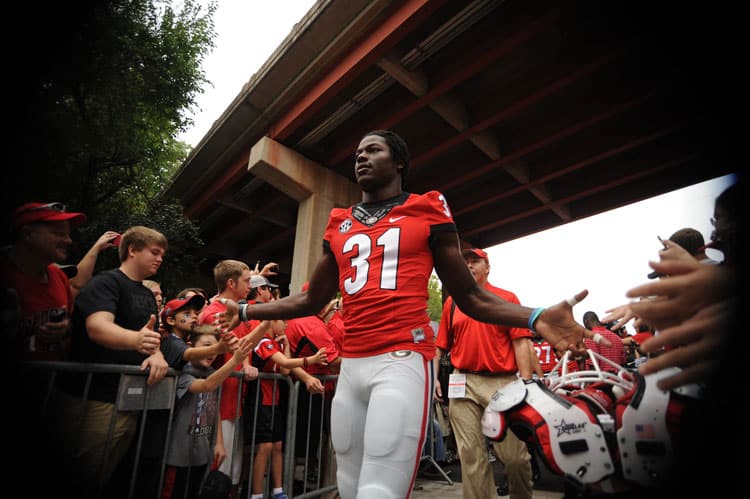 ATHENS, Ga. – Georgia senior receiver Chris Conley has been named a semifinalist for the 2014 William V. Campbell Trophy, according to an announcement by the National Football Foundation & College Hall of Fame (NFF) on Thursday.

Conley is one of eight players from the Southeastern Conference included in the 167 semifinalists. The award recognizes an individual as the absolute best football scholar-athlete in the nation. Up to 16 of the candidates will be named recipients of a prestigious NFF National Scholar-Athlete Award and be included as finalists for the Campbell Trophy.

Since the inception of the Campbell Trophy in 1990, an SEC student-athlete has claimed the award eight times. Former Bulldog Matt Stinchcomb won the award in 1998.

Launched in 1959, the NFF National Scholar-Athlete program awards $18,000 scholarships that can be used for the honorees’ postgraduate educations. This year’s recipients will be announced Oct. 30, and one will be declared the winner of the Campbell Trophy on Dec. 9 at the 57th NFF Annual Awards Dinner in New York City.

Nominated by their schools, which are limited to one nominee each, candidates for the awards must be a senior or graduate student in their final year of eligibility, have a GPA of at least 3.2 on a 4.0 scale, have outstanding football ability as a first team player or significant contributor and have demonstrated strong leadership and citizenship. The class is selected each year by the NFF Awards Committee, which is comprised of a nationally recognized group of media, College Football Hall of Famers and athletics administrators.

Conley has eight catches this season for 121 yards through three games. The 6-foot-3 Conley has 89 receptions in his career for 1,402 yards and 12 touchdowns.

Off the field, Conley has been named to the 2014 Allstate AFCA Good Works Team and a candidate for the Senior CLASS Award in the last two weeks.