Could UGA open the 2015 football season vs. an SEC team?

Could UGA open the 2015 football season vs. an SEC team? 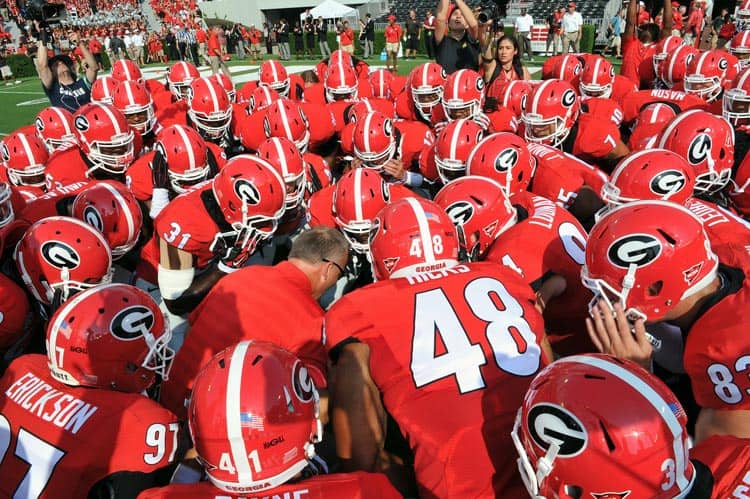 The last time Georgia opened a football season against an SEC team, Ray Goff was in his final season as head coach. The year was 1995 and the opening opponent was South Carolina.

In 2015, Georgia could once again be opening the season vs. an SEC opponent.

The Bulldogs were set to open 2015 at home vs. the Southern Jaguars on Sept. 5, but that date has now changed. According to a letter obtained by SicEmDawgs.com via an open records request to UGA, Georgia will now host Southern on Sept. 26, 2015.

Barring any other changes to their 2015 schedule, the Dawgs won’t have a non-conference game the first three weeks of the season.

So if Georgia does open with a conference game, who could they play? Let’s take a look at UGA’s SEC opponents for next season and who they currently have scheduled for the first weekend in 2015.

Alabama – The Crimson Tide open the 2015 season against Wisconsin at AT&T Stadium in Arlington.

Auburn – Auburn takes on Louisville in the Chick-fil-A Kickoff Game.

Florida – Georgia and Florida are set to meet in Jacksonville on Oct. 31.

Kentucky – UK is currently slated to open at home vs. UL Lafayette.

South Carolina – The Gamecocks open the 2015 season vs. North Carolina in Charlotte.

Tennessee – The Vols open the season at LP Field in Nashville against UAB.

Vanderbilt – The Commodores are slated to visit Middle Tennessee on Sept. 5.

Taking the above into account, it appears the only real possibilities for an SEC opener are Missouri, Kentucky, and Vanderbilt. Missouri would make the most sense as far as fan excitement.

It’s still possible one of the above three games gets moved up. Another option, and it’s a long shot, is that Georgia will cancel one of the games to play in a 2015 kickoff classic game.

In other football news today, UGA athletic director Greg McGarity said they are looking at scheduling games against some other “iconic” programs. These games could be either home-and-home series or neutral-site, kickoff classic games. Michigan, UCLA, USC? Yes please.

UGA's Greg McGarity in process of lining up nonconference football games at an "iconic stadium" with "iconic programs" in different region.