Bulldogs practice in full pads to prep for Trojans

Bulldogs practice in full pads to prep for Trojans 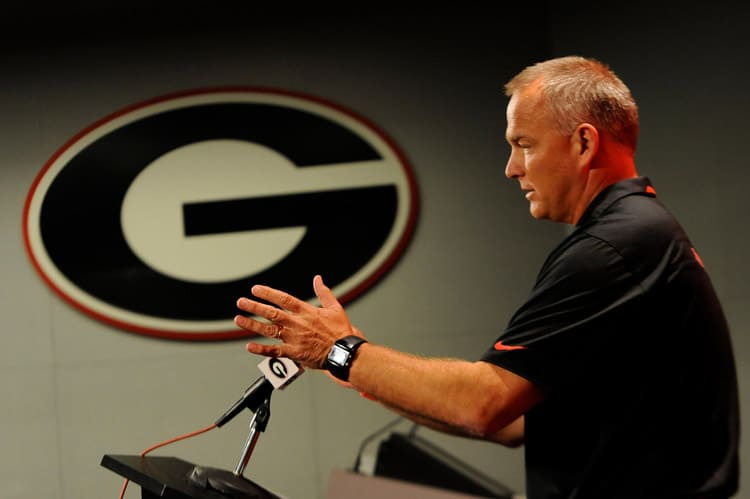 ATHENS, Ga. – The No. 13 Georgia Bulldogs utilized a two-and-a-half-hour, full-pads practice on Tuesday to continue preparing for this weekend’s home date against Troy at Sanford Stadium.

“It was hot, but it was a good day,” head coach Mark Richt said. “We got a lot of work in. We have a long way to go but we’re working hard and we’ll get there.”

“We’ve got Troy, the Troy Trojans, coming in here,” Richt said. “Last time they came in here we scored somewhere in the forties and they scored somewhere in the thirties. I think it’s the second time we’ve ever played Troy here at Georgia. Coach (Larry) Blakeney has been there 24 years. He’s won more games in his league than all the other coaches combined in his league. He got the field named after him….great coach…and they do a wonderful job there. Been doing it for years.

“They’ve actually got 10 guys in the NFL,” Richt continued. “They have NFL talent in their program. They’ve got more NFL players from their team than anybody in their league. They’ve got a veteran team. Nineteen out of 22 starters are either a junior or a senior, which is a very high number. (They have) a lot of guys who have played a lot of ball for them.”

On Monday, Richt announced captains for this week’s game, including tackle Toby Johnson for the defense. In his first career start last weekend at South Carolina, Johnson registered three tackles, including one for a 5-yard loss, and two quarterback pressures.

“We have a philosophy on defense – practice,” defensive line coach Tracy Rocker said following Tuesday’s practice. “When you work hard in practice, you’re going to get rewarded on game day. We saw two weeks of Toby putting forth effort in practice and getting better every day. All of a sudden, it translated at South Carolina…as an individual. We didn’t win the game, but we saw his effort. And I think he saw it and what led to it – practice. It’s all about practicing. If you make plays in practice, you’ll make plays on game day. That was the plus side for Toby. In the staff meeting it was unanimous as a defensive staff. We all picked him.”

Kickoff for Saturday’s matchup between the Bulldogs (1-1, 0-1 SEC) and the Trojans (0-3, 0-0 Sun Belt) has been set for 12:01 p.m. The game will mark Georgia’s first-ever appearance on the SEC Network, with Tom Hart, former Bulldog All-American Matt Stinchcomb and Heather Mitts comprising the announcing team for the contest.