Tuesday workout features a trip to the pool

Tuesday workout features a trip to the pool 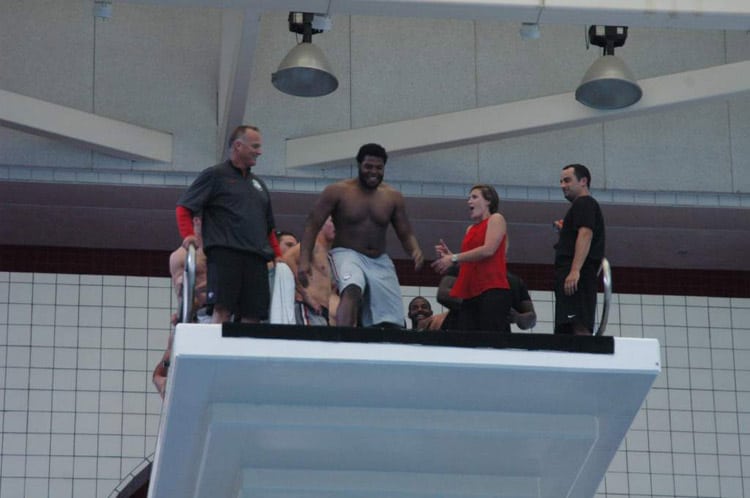 ATHENS, Ga. – The 14th session of preseason camp for the Georgia Bulldogs began with a 10-minute walk-through at the Woodruff Practice Fields and ended with 60 minutes of pool time at the Ramsey Student Center.

It has become an annual surprise during camp that one practice is cut short by Georgia coach Mark Richt who delivers the news much to the delight of the team. The highlights at the pool include the newcomers jumping off the 10-meter platform and Richt doing his signature back dive.

Afterwards, the defensive newcomers met with the media for the first time and gave their impressions of Tuesday’s action.

“I was excited; they surprised us because we were already out on the field going through our walk-through,” freshman defensive back Malkom Parrish said. “The first thing that went through my mind was ‘thank the Lord.’ It was hot, and it’s going to be good to be in the water.”

Freshman linebacker Lorenzo Carter, a 6-6, 237-pound native of Norcross, said he was excited to go to the pool, and he took his leap from the platform, knowing his teammates would be there to help him once he splashed down.

“It was a scorching day, and I was ready to practice,” Carter said. “The coaches did a good job of keeping it a secret. The offensive line are my boys and once I jumped off the high dive, they came to get me out of the water.”

When talk turned to football, Parrish, a 5-10, 194-pound native of Quitman, said he already has learned plenty from his coaches including defensive coordinator/secondary coach Jeremy Pruitt. “I’m playing cornerback and star, and there’s different assignments, but I’m learning the defense. I practice hard and doing what I can. I go hard every play. I know the secondary is a key part of the defense.”

“Coach Pruitt has got some great schemes,” Carter added. “Pass coverage has been an adjustment, but I’m learning the technique. It doesn’t matter if you come in as a one-star or a five-star recruit, it’s a new day and you start with a fresh slate. It’s up to the coaches to see who plays, and I feel like I’m getting better.”