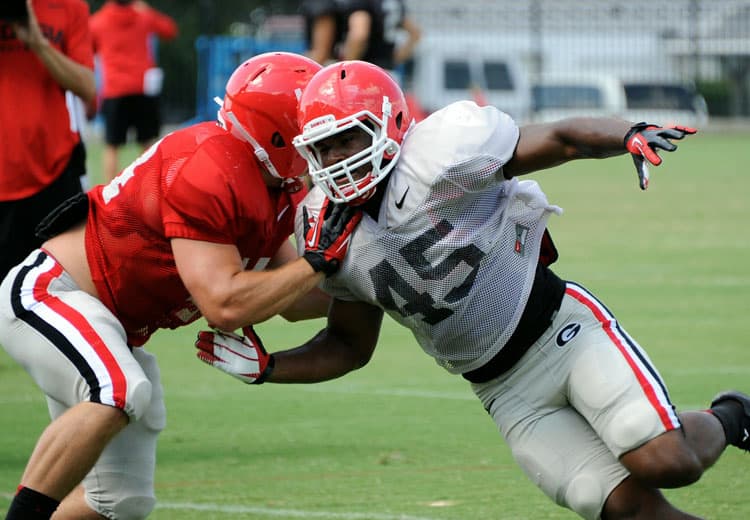 ATHENS, GA – The 12th-ranked Georgia Bulldogs returned to Sanford Stadium for the second consecutive day and Wednesday’s practice was more of a dress rehearsal.

Georgia coach Mark Richt said the focus of Wednesday’s workout included simulating pre-game warm-up and a half of football. It featured Georgia on offense and defense wearing their red jerseys on the home sideline with the scout team in white jerseys playing the part of 16th-ranked Clemson as the visitors on the other sideline. The action varied from a series of scrimmage plays to kicking plays and vice versa plus sudden changes of possession. No statistics were kept on the day.

“I can’t say the starting lineup on both sides of the ball is rock solid,” Richt said. “We’ve got a lot of inexperienced guys. It will be a trial by fire, and we’ll see who handles the pressure. There’s not a lot that is settled, especially on the defensive side of the ball. We may make a change during the game or from one game to the next.”

Richt pointed out that several Bulldogs have had an outstanding preseason camp including linebackers Jordan Jenkins and Leonard Floyd, safety Corey Moore, junior placekicker Marshall Morgan, punters Adam Erickson and Collin Barber. Also, he elaborated on a couple of sophomore receivers in Kenneth Towns and Blake Tibbs, both who have seen limited action in their career but could potentially have a bigger role this year.

“Kenny has worked himself in to a position where he knows what to do; he’s in great condition; he’s got good hands, and I wouldn’t be shocked that he’ll play some downs for us,” Richt said. “The same can be said of (Blake) Tibbs. They’ve had a nice camp. Blake has been healthy and got the work in and improved. He’s matured and is dependable. It was never a skill set issue for him, and to his credit, he’s earned playing time.”

Towns appeared in seven games last year with two catches for 19 yards and one touchdown. Tibbs saw action in two games with two receptions for 18 yards in 2013.