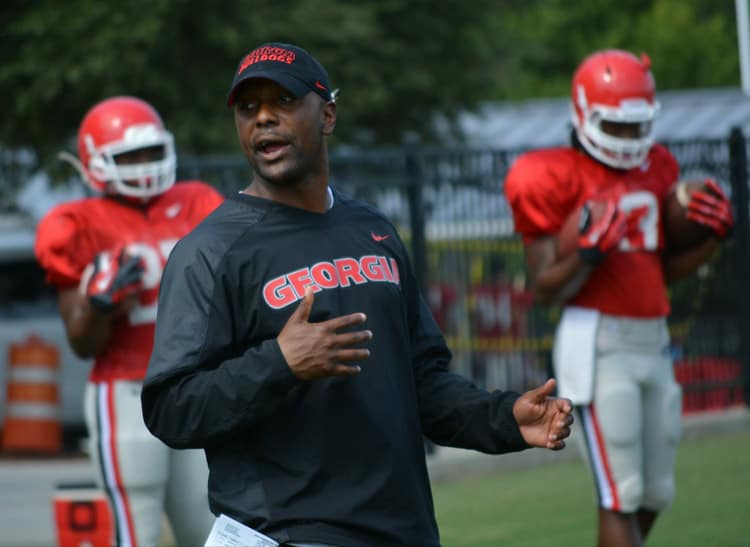 The No. 12-ranked Georgia Bulldogs logged a two-hour practice in full pads on Friday as preparations continued for the 2014 season opener.

The Bulldogs endured temperatures in the mid-90s on the Woodruff Practice Fields, and those conditions are likely similar to what they will be faced with a week from Saturday when No. 16 Clemson visits at 5:30 p.m.

“Our players are focused on doing a good job fundamentally and being in great shape,” Georgia offensive coordinator Mike Bobo said. “It’s going to be hot, but you can’t get tired and let the little things hurt you. You can’t get out of position or get lazy or have holding calls. We’ve got to play fundamentally sound. This is going to be a big challenge, but that’s why you come to Georgia, for games like this.”

After Friday’s practice, Bobo and several assistant coaches met with the media and discussed the Bulldogs’ progress.

First-year inside linebackers coach Mike Ekeler said he has been pleased with the way his charges are practicing.

“Those guys have battled through and played their tails off and gotten better,” Ekeler said. “We’ve got a long way to go, but we like who they are and their character and how hard they’ve worked. They’re good guys to have on the team. … I would love to play them all, but as Coach Richt says, ‘It’s not the YMCA,’ and we need to have our best players out there and let them roll. To keep on rolling players in will be difficult because Clemson does not have a stagnant offense.”

“He’s got a unique style and a unique background with the people he’s learned under,” Ekeler said. “He’s extremely intelligent, he really understands the kids, he’s fiery and he’s very detail oriented. He’s got the ‘it’ factor to him. He’s the real deal.”

The Bulldogs will return to the Woodruff Practice Fields on Saturday and then will take Sunday off.

The Bulldogs and Tigers will square off a week from Saturday at Sanford Stadium at 5:30 p.m. The game will be televised by ESPN.