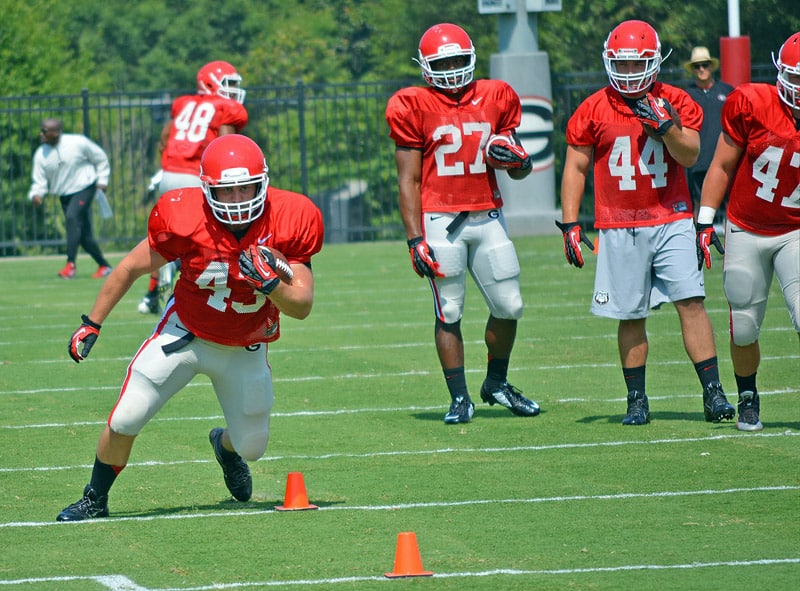 Tuesday’s session was the fifth practice for the 2014 Bulldogs.

“They did alright,” head coach Mark Richt said. “As many reps as we had in practice there were some you are really excited about and some you shake your head. We have potential, but we don’t quite have consistency yet.”

The Bulldogs will conduct their first two-a-day practice on Wednesday. Georgia is slated to have its first scrimmage Saturday afternoon.

Offensive coordinator Mike Bobo met with the media prior to Tuesday’s practice and said the Bulldogs will focus on installing most of the offense leading up to Saturday’s scrimmage.

“We’re trying to install 90 percent of the offense and basically throw everything at them,” Bobo said. “We want to see what sticks and and see what we are going to be and who we are going to be. We’ll sit down and decide who is going to be where and who has a chance to play, but right now we are letting them learn.”

The annual Fans’ Picture Day will be held Saturday, Aug. 16, in the Reed Plaza area of Sanford Stadium and will feature Richt, football players, cheerleaders, other UGA athletic teams along with mascot, Uga IX.

Special ticket coupons are required for access to the location for Uga IX and Richt. Those tickets will be distributed to the first 150 fans at 10:00 a.m. from the East End ticket windows on East Campus Road.