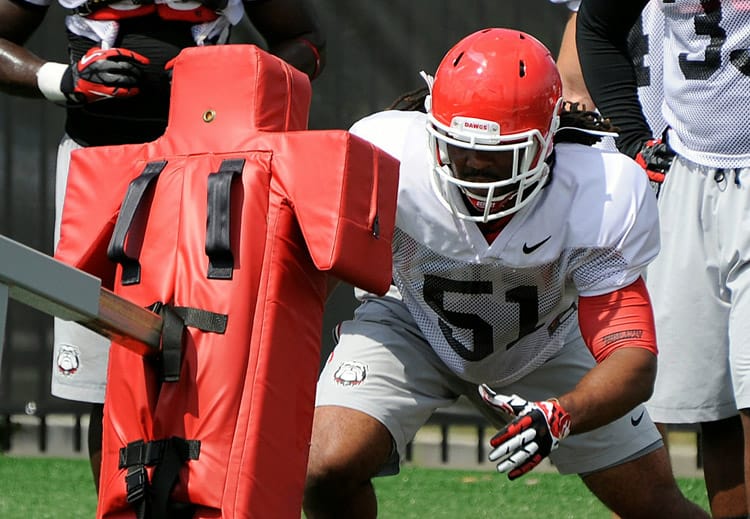 The Georgia Bulldogs football held the first of two practices today, which was their 12th preseason practice overall.

According to beat reporters, several players have minor injuries and were wearing green non-contact jerseys.

Also, add Jonathon Rumph to the list of green jerseys on the WRs.
Did not participate in Saturday's scrimmage.
Was participating in drills

Ramik Wilson was said to be working on the side with Ron Courson, UGA’s Director of Sports Medicine.

There is also one possible position change upcoming. Detric Bing-Dukes, an inside linebacker, was working with the fullbacks today.

After the practice this morning, a couple of freshmen met with the media.

“It’s a grind, but I really like it,” tight end Jeb Blazevich said. “The transition is going as smooth as it can. I’m trying to learn and get better every day. I’m still making a few freshman mistakes. It’s like, ‘Wow, I can’t believe I just did that. We just went over that.’ I have to grow up quick and the other tight ends are making sure I’m doing that.”

“It’s great; it’s been a wonderful experience,” running back Sony Michel said. “It’s a whole other atmosphere from high school. I feel like a freshman from the perspective of having to learn, but in terms of work ethic, I’m in there to compete. Nick (Chubb) and I are learning from each other and feeding off each other, and if we’re not sure about something, we can ask the older guys. They’re there to help us. We want to work to be at their level.”