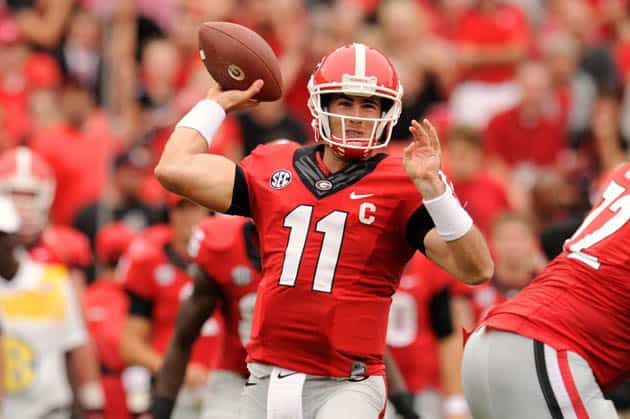 Former Georgia football players Chris Burnette and Aaron Murray were named as members of the 2014 NFF Hampshire Honor Society, according to an announcement from the National Football Foundation and College Football Hall of Fame this week. In its eighth year, a record 838 players from 267 schools qualified for membership in the society.

“We continue to raise the bar each year for the number of student-athletes who qualify for membership in the Hampshire Honor Society,” said NFF President & CEO Steve Hatchell. “The Hampshire Honor Society plays an important role in highlighting that college football players clearly play a leadership role in the classroom as well as on the playing field. We congratulate each of these young men for their commitment to excellence.”

The society is comprised of college football players from all divisions who have maintained a cumulative 3.2 GPA or better over the course of their collegiate careers. To be considered for the society players must also have been a starter or significant contributor in their final year of eligibility and met all NCAA-mandated progress towards degree requirements.

Burnette and Murray were two of 11 players from eight Southeastern Conference schools to be named to the society. Georgia was one of only two conference schools with multiple honorees. The University of Mississippi topped the SEC with three nominations. Alabama, Arkansas, Auburn, Kentucky, Tennessee and Vanderbilt were the other SEC schools with athletes named to the society.

The Hampshire Honor Society represents a powerful component in the organization’s rich history as an innovator in promoting the scholar-athlete ideal. Launched in 1959 with a donation from Hall of Fame coach Earl “Red” Blaik, the NFF’s National Scholar-Athlete Awards, presented by Fidelity Investments, became the first initiative in history to grant postgraduate scholarships based on a player’s combined academic success, football performance and community leadership. And, since its inception, the NFF National Scholar-Athlete Awards program has awarded $10.4 million to 787 top scholars and community leaders.