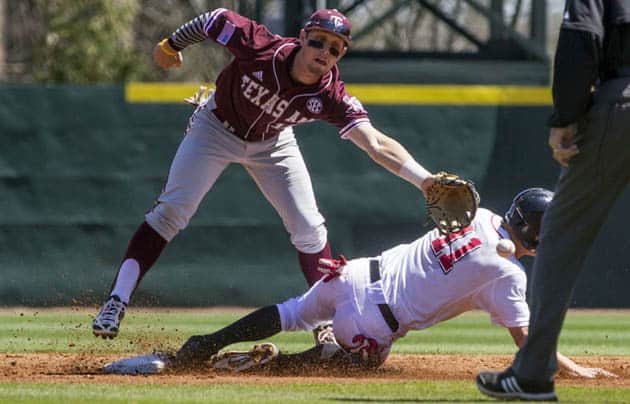 Missouri salvaged the final game of an SEC series with visiting Georgia Sunday, posting a 4-2 decision at Taylor Stadium.

“A slow start killed us. I don’t know if they’re going to score off of us if we don’t give them opportunities. We made two bad plays in the field and had some mental mistakes early on to give them four runs. They might score one there, maybe two at most, but we gave them the opportunities,” said Georgia head coach Scott Stricklin. “We battled back, I was proud of the way David Sosebee threw, Dylan Cole threw the ball really well and gave us a chance to win when we had bases loaded in the eighth. We put ourselves in that position but we dug a hole early.”

The Tigers (14-16) got a complete game from senior Eric Anderson (1-2), his first as he registered a career-high 12 strikeouts. Missouri took a 1-0 lead in the first. Anderson, who also served as the designated hitter, led off with a single and advanced to second on a failed pickoff attempt by junior left-hander Jarrett Brown. Shortstop Josh Lester moved Anderson to third on a sacrifice bunt. Two batters later, catcher Dylan Kelly lined an RBI-single to left field. Four of the first six Tigers reached base in the inning, however the Bulldogs held them to just one run. The Tigers extended their advantage to 4-0 in the second, scoring three runs on one hit, two walks plus a pair of Bulldog miscues.

In the bottom of the third, Georgia lifted Brown in favor of David Sosebee and also put in Zack Bowers at catcher and Heath Holder at first base. Brown was making his first start after 52 career relief appearances. He allowed four runs on three hits with two walks in two innings and fell to 1-1. Sosebee provided sterling relief, going four scoreless frames with three strikeouts. Senior right-hander Dylan Cole came on to start the seventh and took care of the final two innings.

Anderson retired the first 10 he faced before junior third baseman Hunter Cole smacked a one-out double in the fourth, his team-leading 12th of the year. With two outs, junior Nelson Ward delivered a run-scoring single to cut the deficit to 4-1. For Ward, it was his team-best 21st RBI on the year. Georgia got another two-out run in the fifth courtesy of freshman Mike Bell’s first career home run. The blast over the left field fence closed the gap to 4-2. In the eighth, Georgia loaded the bases with two outs for Ward, and Anderson got him to ground out to maintain the Tigers lead.