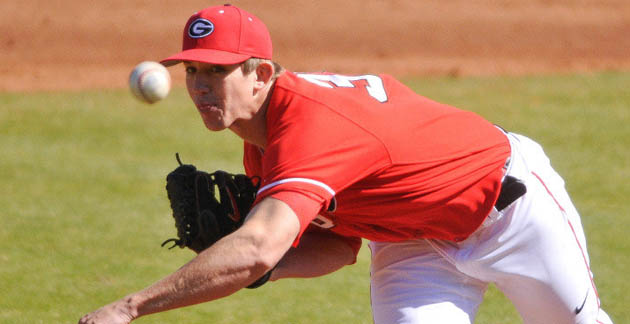 CLEMSON, SC – Patrick Boling pitched a career-high 7.2 innings and Hunter Cole drove in four runs to lead Georgia to a 6-2 win over 14th-ranked Clemson Tuesday in front of 4,260 at Doug Kingsmore Stadium.

In the top of the first, Cole (3-for-5, 4 RBI) gave the Bulldogs a 1-0 lead when he blasted a solo home run off the scoreboard. It was his second of the year. Clemson threatened in the first, loading the bases with nobody out. However, Boling battled back to strike out cleanup hitter Steven Duggar and then got Chris Okey to bounce in to an inning-ending double play. The Bulldogs turned two double plays on the night to give the squad 33 for the year, and that ranks second in the Southeastern Conference.

Georgia (19-13-1) extended its advantage to 5-0 in the second as Cole ignited a two-out rally with a two-run single off Clemson reliever Kevin Pohle. Junior left fielder Conor Welton followed with a single to extend his hitting streak to seven games. Next, junior shortstop Nelson Ward brought them home with a two-run double down the left field line as he leads the club with 23 RBI. The Tigers opted to go to Pohle after starter Brody Koerner issued a pair one-out walks. Koerner surrendered three runs on one hit with four walks and two strikeouts in 1.1 innings. He got the loss to fall to 0-1.

The Tigers (20-12) scratched for a run in the third inning. After striking out the first two batters, Boling issued back-to-back walks and Duggar lined an RBI-single to left to make it 5-1. Pohle provided 4.2 innings, allowing two runs on three hits with three walks and three strikeouts. In the seventh, Clemson looked to right-hander Clay Bates and he went two innings and surrendered one run on one hit with two walks and Matt Campbell pitched the ninth.

In the eighth, freshman Stephenn Wrenn reached on a one-out walk and raced around to third on a pair of stolen bases. It gave him three for the evening, which tied his career high. Cole collected his fourth RBI of the night to tie his career best with a shot off the wall for a 6-1 lead.

In the bottom of the frame with one on and two outs after an unearned run was scored, Boling was lifted in favor of Pete Nagel. Boling improved to 3-2 on the year after a career-long 7.2 innings and allowed just two runs (one earned) on five hits with six strikeouts. Nagel took care of the final four outs to preserve the victory.

“Pat (Boling) got taken out of the rotation, and that’s tough for anyone to handle and he responded the right way. He had a little anger in him tonight and that was good, I told him if you’re ticked off you need to stay ticked off because after he struggled with two walks in the third he was nearly unhittable. That was the best I’ve seen him throw. I didn’t see Pete (Nagel) before he got hurt but that’s the best I’ve seen Pete Nagel throw the baseball right there, it was encouraging to see those guys throw the ball like that,” Georgia head coach Scott Stricklin said. “Hunter Cole barreled up four balls, he had three hits but he should have had four and really swung it well. I’m proud of the way we played.”

Up next, Georgia begins an SEC series with 23rd-ranked Tennessee (21-9, 5-7 SEC) on Thursday. First pitch will be at7:33 p.m., and the game will be televised on ESPNU as the “SEC Game of the Week.” Game two of the series on Friday will start at 7 p.m. and Saturday’s contest will be at 4 p.m.