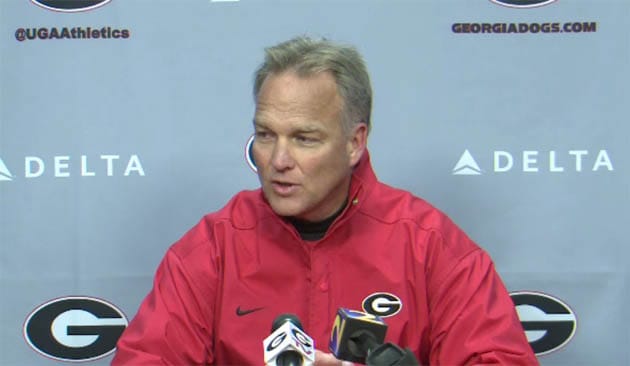 ATHENS, Ga. – The Georgia football team held its first full pads practice of the spring Tuesday afternoon at the Woodruff Practice Fields. The Bulldogs worked out for approximately two hours in cold and blustery conditions.

A large contingent of faculty members and their families attended Tuesday’s practice as part of the Bulldogs’ annual faculty appreciation.

“It was cold and windy, but we really had a good day,” said head coach Mark Richt. “It was the first day in full pads. We got into our 3-on-3 drill, which is very competitive. The first time you tackle in the spring usually gets everyone’s blood pumping and it did. I was really pleased with the energy.”

Richt said he has been satisfied with the Bulldogs’ progress through four practices this spring.

“We’re making a lot of progress,” Richt said. “Guys are running to the ball on defense, and we are getting a lot of hats to the football right now. Offensively we are doing a good job there too. I see a bunch of guys working really hard and a bunch of coaches coaching really hard. It’s been a pleasure to watch so far.”

Georgia will practice again Thursday and Friday before the first scrimmage of the spring on Saturday.

The annual G-Day Game is slated for Saturday, April 12 at 1 p.m. Gates at Sanford Stadium will open at 11 a.m., and admission is free.