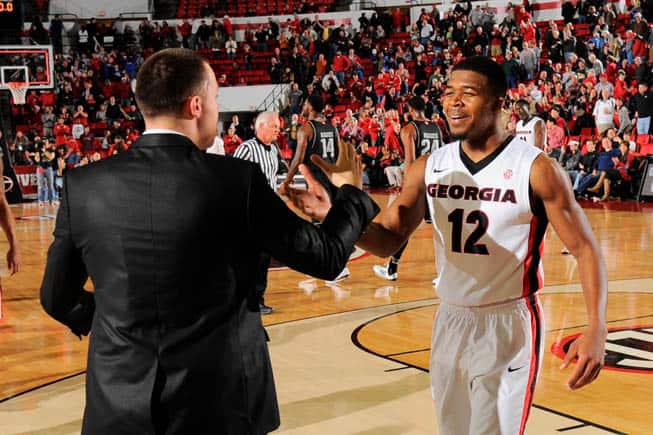 The Bulldogs (12-10, 6-4) were led in scoring by Kenny Gaines who scored 14 points. Donte’ Williams was just one point short of a double-double, finishing with nine points and 10 rebounds.

Let’s first give Texas A&M credit for being a really good defensive team,” said head coach Mark Fox. “As I said on my radio show before the game, they defend and they play disciplined offensively and then just stay right there in a game and give themselves a chance to win. We knew it would be a possession-by-possession game because that’s just how they play and they’re good at it. Their defense was good. Their defense was better than our offense.

“I wasn’t pleased with our team today in shootaround and it was one of the first times all year that I had to get on our team [during a shootaround]. We just didn’t play as sharp as we had, and again that’s taking nothing away from Texas A&M because you have to give their defense credit. We are fortunate to win. It’s a good win. In this league, every win is good so we’ll certainly take it.”

After a slow offensive start for both teams, Georgia used an 11-4 run to take a 25-18 with just two minutes remaining in the half. Texas A&M (13-10, 4-6), however, scored the half’s final five points, including a three-pointer at the buzzer, to shrink the Bulldog deficit to 25-23 headed into the halftime break.

The Aggies fought back to take a 40-39 at the midpoint in the second half with a layup from Shawn Smith, but Georgia quickly re-took the lead on a 5-0 run. Texas A&M wouldn’t lead again, as Georgia shook off multiple offensive spurts by the Aggies. Georgia pumped the lead to eight—its largest of the game to the point—off of a steal and slam by Charles Mann which secured Georgia’s 12th win of the season.

The Series: The Bulldogs improve to 3-0 all-time against Texas A&M.

Up Next: The Bulldogs will head to Starkville, Miss. to take on Mississippi State on Wednesday at 8:00 p.m. The game will be televised on CSS.