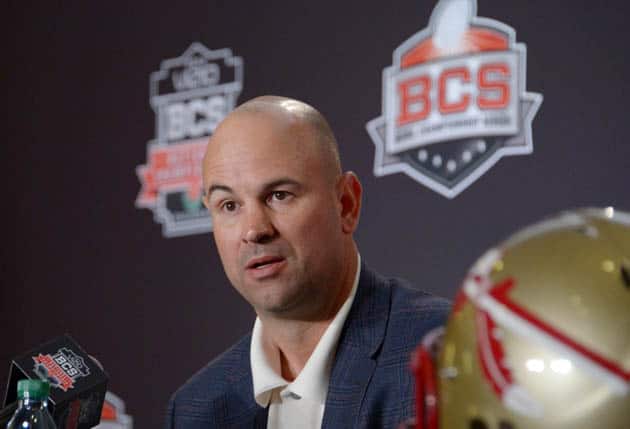 Florida State defensive coordinator Jeremy Pruitt has been named to the same position with the Georgia Bulldogs, UGA officially announced this afternoon.

The AJC first reported the news of Pruitt to UGA around 1:30pm ET this afternoon. Shortly afterwards, the impending hiring of Pruitt was confirmed by ESPN, UGASports.com, 247Sports and others.

“This is an outstanding professional and personal opportunity,” said Pruitt. “I’m looking forward to meeting the current players and getting on the road to visit with recruits.”

Pruitt replaces former defensive coordinator Todd Grantham, who accepted a 5-year, $1 million per season offer to lead the defense of the Louisville Cardinals. Pruitt will earn $850,000 annually in Athens according to reports.

Jeremy Pruitt, a native of Rainsville, Alabama, was the defensive coordinator and defensive backs coach for Florida State in 2013 during their national championship season.

Under his leadership, the 2013 Seminoles defense was ranked first in the Football Bowl Subdivision in scoring (12.1) and third in total defense (281.4). They also ranked first nationally in pass defense (156.6), first in interceptions (26), and second in defensive pass efficiency (93.8).

Prior to his DC stint, Pruitt was the defensive backs coach at Alabama from 2010 to 2012. The Crimson Tide won the national title in 2010 and 2012, and their defense was ranked in the top 10 of the FBS each year in pass efficiency defense, the top 15 in pass defense, and the top five in total defense and scoring defense.

Kirby Smart was thought to be the leading candidate for the UGA DC job for the second time around. However, some pundits are now saying Smart was never really a serious candidate this time. That means the rumors of a $1.5 million dollar per year offer to Smart were just that — rumors.

Pruitt will likely also coach the secondary, so that leaves only an outside linebacking coach position available. That is also one of the jobs that UGA has posted as available.