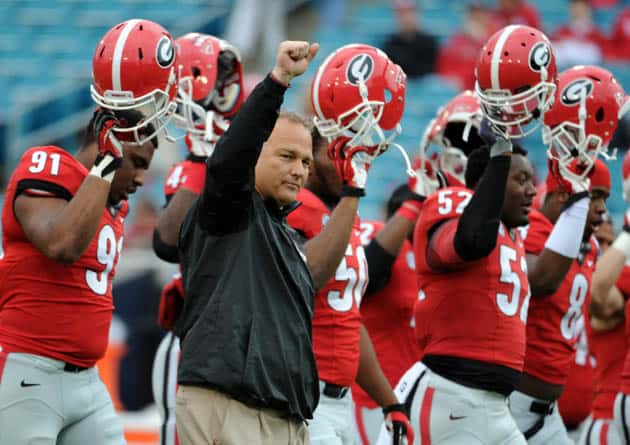 The Georgia Bulldogs, which lost their final game of the 2014 season to Nebraska in the Gator Bowl, finished the season unranked in both the AP and Coaches Polls. It’s the third time in the past five seasons that the Dawgs have finished outside the polls.

It was a disappointing year for the Dawgs on the gridiron. Georgia, ranked 5th in both preseason polls, lost to Clemson, Vanderbilt, and Auburn on the road, Missouri at home, and Nebraska in the Gator Bowl.

Injuries were a factor in the final results, however. Todd Gurley and Michael Bennett missed several games, Keith Marshall and Justin Scott-Wesley were lost for the season at Tennessee, and Aaron Murray tore his ACL against Kentucky. Those were the major ones, but there were many more.

The 2014 Georgia Bulldogs won’t be ranked as high in the preseason as the 2013 team, and they obviously won’t be unranked.

Several pundits have already released their “way too early” rankings for the 2014 season, and UGA comes in between 10th and 17th in each one. Here are a few of those rankings with Georgia’s position and notes:

Aaron Murray’s gone, but Todd Gurley isn’t, and the Bulldogs seem to play their best defense when expectations are lower. (Having up to 10 returning starters on that side of the ball should help, too.) If the Bulldogs’ collection of injured receivers can return to full strength in 2014, this is still the likely SEC East favorite.

Nothing seemed to go right for the Bulldogs in the second half of the 2013 season, from myriad injuries to the final minutes of a crushing 43-38 loss to Auburn to a 24-19 loss to Nebraska in the Taxslayer.com Gator Bowl. But if there’s a silver lining in UGA’s disappointing 8-5 campaign, it’s that a lot of injured players are coming back in 2014. The Bulldogs will have to replace record-setting quarterback Aaron Murray, but rising senior Hutson Mason performed pretty well in two starts after Murray suffered a season-ending knee injury. Georgia might bring back six starters on offense, along with top receivers Malcolm Mitchell and Justin Scott-Wesley and tailback Keith Marshall, who suffered season-ending injuries. The Bulldogs will have to replace three starting offensive linemen. UGA might have back 10 starters from its underperforming defense, which started six freshmen and sophomores in 2013. Defensive coordinator Todd Grantham will be under fire to fix UGA’s problems on that side of the ball. The Bulldogs open the season against Clemson at home and don’t play Alabama, LSU or Texas A&M during SEC play.

Everything can’t go wrong twice, at least that’s what Dawg fans hope. Georgia’s raw but talented defense in 2013 becomes an experienced and talented defense in 2014. Their talent at running back and receiver should be available this time around. The troubles should be a rebuilt offensive line will being a work in progress and replacing four-year starter Aaron Murray. His savvy, unheralded play kept the train running on time, when it could easily have been derailed last season. They may miss him dearly. Achilles Heel: An incredibly overrated coaching staff.

A healthy Todd Gurley by himself can make most teams fit in the top 15.

Assuming Georgia returns their players with injuries, keeps starters on defense from being suspended, and new quarterback Hutson Mason proves decent, the Bulldogs should be a bit of a sleeper in 2014.

Rest easy, Bulldog fans, this year you guys are not my sleeper pick to win the BCS title.

Why No. 17? Because Georgia will be healthier. That alone is reason to think the Bulldogs will add at least one win to this year’s total, even if the team will sorely miss stars like quarterback Aaron Murray and tight end Arthur Lynch. But consider who returns: Todd Gurley and Keith Marshall, the latter from injury; quarterback Hutson Mason, who spelled Murray down the stretch; a large number of receivers, another few from injury; three-fifths of the offensive line; and the majority of a defense that struggled with youth in 2013. One issue? The Bulldogs again draw Clemson in non-conference play and face South Carolina and Missouri on the road.