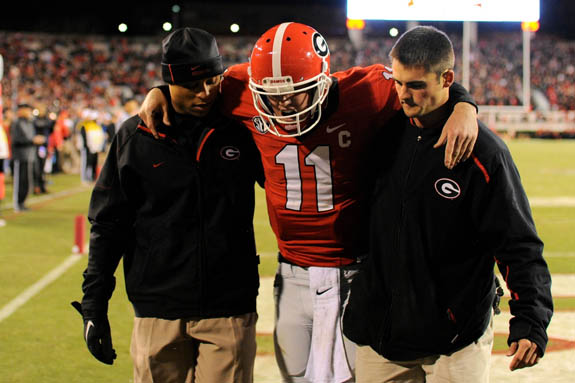 Aaron Murray threw four touchdown passes in the first half as the Georgia Bulldogs rolled over the Kentucky Wildcats 59-17 on Senior Night.

But the big story was another injury, and this one was big. Senior quarterback Aaron Murray suffered an undisclosed injury to his left knee and had to leave the game with 2:17 remaining in the first half.

It was a tough ending to Senior Night for Murray, who didn’t get to depart Sanford Stadium to the cheers and admiration from the fans he so much deserved. Instead, he was at St. Mary’s Hospital getting an MRI on his knee. We’ll have more on that as information is released.

Murray finished the game 18-of-23 for 183 yards, four touchdowns, and one interception. He also rushed four times for 31 yards.

Backup and likely 2014 starter Hutson Mason came in a completed 13-of-19 passes for 189 yards and a touchdown. Mason also scored on a one-yard rush early in the third quarter.

Todd Gurley led the Bulldogs on the ground with 77 yards on only eight carries. Gurley also caught five passes for 90 yards and two touchdowns. Freshman Brendan Douglas was second with 59 yards on 12 carries.

Rhett McGowan led both teams in receptions with seven for 90 yards and a TD. Gurley was second with five while Arthur Lynch had four and Chris Conley three for the Bulldogs.

Overall, Georgia racked up 602 yards of total offense (372 passing, 230 rushing). The defense held the Wildcats to only 211 total yards and recovered three turnovers.