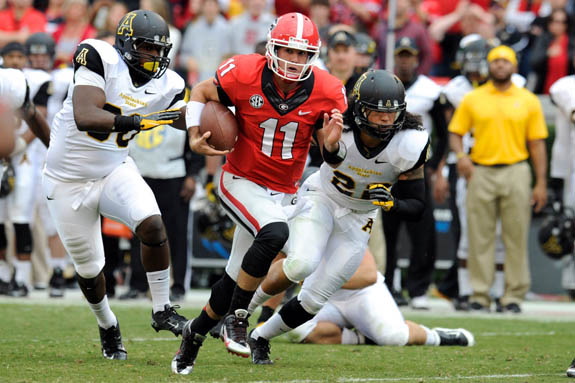 Georgia got off to a slow start, but cranked up the offense in the second half to thump the visiting Appalachian State Mountaineers 45-6. The Bulldogs improved their overall record to 6-3 (4-2 SEC).

Aaron Murray threw two touchdown passes and in the process became the SEC’s new career-leader with 115. He finished the game 19-of-26 for 281 yards, two TD’s, and one interception. He also rushed twice for 24 yards.

After taking only a 14-6 lead into halftime, the Dawgs came out strong and put up 17 points in the 3rd quarter. That allowed junior backup quarterback, and likely starter next season, Hutson Mason to get in the game.

Mason was effective, completing 11-of-16 passes for 160 yards, one touchdown and an interception.

Running back Todd Gurley was used sparingly, rushing only 13 times for 75 yards and a touchdown. Murray had the second-most rushing yards with 24, and Brendan Douglas added 17 yards on six carries.

The defense was led by Ramik Wilson with 12 tackles. Amarlo Herrera added 7 tackles, while Ray Drew had five tackles and a sack.

Next up for Georgia is a trip to Auburn on Saturday, Nov. 16. Game time and TV should be announced by Sunday afternoon.