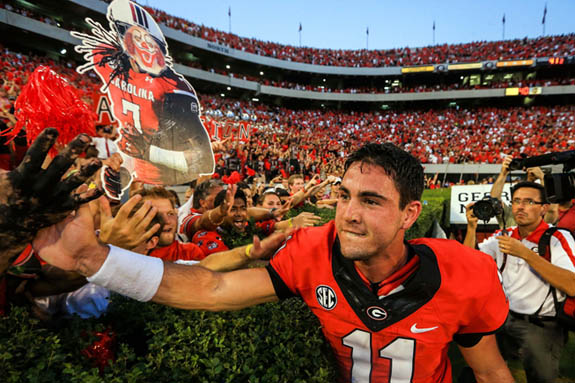 Aaron Murray threw four touchdown passes and Todd Gurley ran for another to lead the Georgia Bulldogs over the South Carolina Gamecocks 41-30.

The win stopped a two-game losing streak to the Gamecocks and gives the Bulldogs a 1-1 overall record and the early lead in the SEC East standings.

Murray, who was named the Walter Camp Football Foundation Offensive Player of the Week for his performance, connected on 17-of-23 passes for 309 yards. His TD tosses were caught by Justin Scott-Wesley, Keith Marshall, Arthur Lynch, and Todd Gurley.

Gurley led the Dawgs with 134 yards on 30 carries and two touchdowns, one on the ground and one through the air. Keith Marshall added 58 yards while fullbacks Brendan Douglas and Quayvon Hicks added a bruising 31 and 28 yards, respectively.

Justin Scott-Wesley, who caught an 85-yard TD pass from Murray in the fourth quarter, led all receivers with 116 yards on three receptions.

Overall, Georgia racked up 538 yards of total offense and won the time of possession battle by over ten minutes. The Dawgs also recovered a Gamecock fumble and didn’t commit any turnovers themselves.

The defense surrendered a lot of yards to a balanced South Carolina offense. The Gamecocks rushed for 226 yards and passed for 228 (454 total yards).

The Bulldogs now enjoy an open date next weekend before hosting the North Texas Mean Green on Sept. 21. Kickoff time and television coverage for that game has not been announced yet.