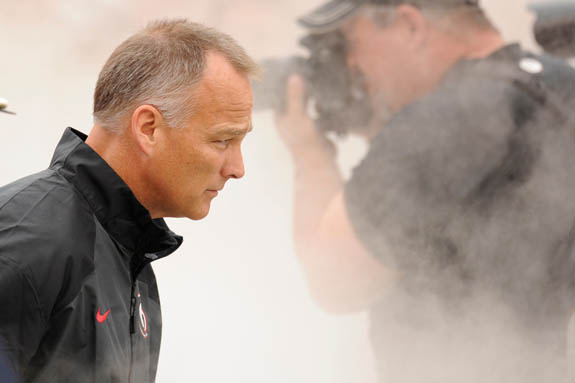 Mark Richt called for all the fans to wear Red on Saturday. (Dale Zanine-USA TODAY Sports)

On Saturday, the 9th-ranked Georgia Bulldogs host the No. 6 LSU Tigers. The game will be televised by CBS at 3:30 p.m. ET.

After playing LSU, Georgia will become just the fourth team in the BCS era to play three Top 10 teams in their first four games. If Georgia comes out on top, it will be the first time the Bulldogs have ever beaten two Top 10 teams at Sanford Stadium in the same season.

To do that, the Bulldogs will have to contain former UGA quarterback Zach Mettenberger and LSU’s trio of backs, led by Jeremy Hill.

The atmosphere in Athens should be electric with two Top 10 teams on the field, ESPN College GameDay in town, and (most) everyone wearing red after Mark Richt called for a “Red Out”, perhaps to quell the rumors of a possible Blackout.

For an in-depth preview of the North Texas-Georgia game, check out Dr. SEC’s Preview & Predictions.