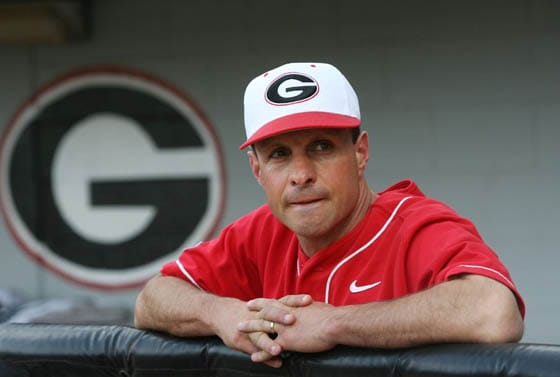 Dave Perno is out at UGA. (Curtis Compton-AJC)

Dave Perno has been fired as head coach of the Georgia Bulldogs baseball team, multiple sources have reported. An official announcement from UGA is expected sometime today.

Georgia finished the 2013 season 21-32 overall and 7-20 in the SEC. They finished last in the SEC East and had the worst conference record overall. Moreover, they didn’t even qualify for the SEC Baseball Tournament.

Last season, the Diamond Dawgs finished with a winning record overall (31-26), but were 14-15 in the conference and didn’t make the NCAA regionals.

UGA Director of Athletics Greg McGarity delivered the news to Perno at a meeting Sunday evening.

“His mind was made up,” said Perno. “Unfortunately, I left an opening. I gave him an excuse. I thought we had a chance to make a move, but it just didn’t work out. I felt like we were on the cusp. But I know next year’s going to be special and those guys are going to do a good job and I’m going to look forward to watching them.”

In 2008, Georgia finished as the runner-up to champion Fresno State. Dave Perno was named the SEC Coach of the Year that season.

As far as potential replacements for Perno, it’s a little early for any front-runners to be named. For now, you can peruse UGASports.com’s coaching Hot Board, which lists some candidates.

UGA has officially announced that Perno has “resigned” his position.

“I have accepted David’s resignation and would like to express our appreciation to him for his numerous contributions to our baseball program over the last two decades as a player, assistant and head coach,” said UGA Director of Athletics Greg McGarity. “David was a part of our baseball program when it won a national title and helped Georgia advance to the College World Series five times during his playing and coaching career. We wish him the very best in his future endeavors. He has been a great representative for UGA. We have begun the process of finding the next head coach to lead our program and will do so as quickly as possible.”

“It’s been a privilege to wear the Bulldog uniform and represent the University of Georgia as a player, assistant and head coach,” said Perno. “I love the University and, I’m very appreciative of the many players, coaches, and support staff with whom I’ve had the opportunity to work with in Athens. I would like to thank Coach Vince Dooley for providing me with the opportunity of a lifetime because it was a dream come true to lead the Georgia program. I’d like to thank Dr. Michael Adams for his support during his tenure. And I’d like to tell all my former and current players that I love them and appreciate all that they have done for this program. Finally, I want to thank the wonderful fans who shared in our success at Foley Field.”