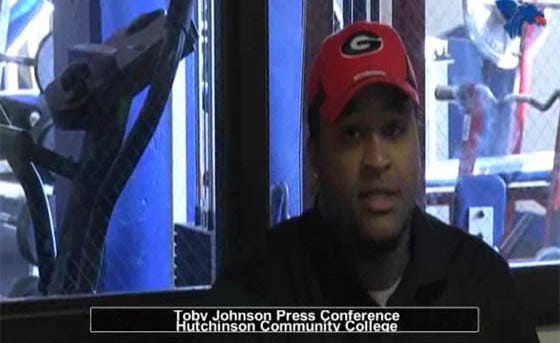 Four-star JUCO defensive tackle Toby Johnson committed to the Georgia Bulldogs during a ceremony at his school this afternoon.

“I will be taking my talents to the University of Georgia,” Johnson said. “When I went down there, not only was it the facilities, but Coach (Mark) Richt and Coach (Chris) Wilson. Coach Wilson and I have a great relationship. That’s what sold me right there. It was pretty much where I wanted to be.”

UGA was thought to be out of it for Johnson, but the Dawgs evidently made up ground at the end and beat out Auburn, Mississippi State, and Oklahoma.

After graduating from Banneker High School in College Park, GA, Toby Johnson (6-4, 305) played two seasons for Hutchinson Community College in Hutchinson, KS. He was named a NJCAA All-American both seasons.

Rivals.com rates him as a 4-star recruit and the no. 8 junior college player in the country.

The addition of Toby Johnson gives the Bulldogs 33 signees for their 2013 recruiting class. He also gives the Dawgs some much needed help on the defensive line.

“We are thrilled that Toby has decided to become a Georgia Bulldog,” UGA head coach Mark Richt said in a statement Tuesday night.  “We’re looking forward to watching him compete for playing time this upcoming season.”