Georgia moves up to 3rd in Week 13 BCS Standings

Georgia moves up to 3rd in Week 13 BCS Standings 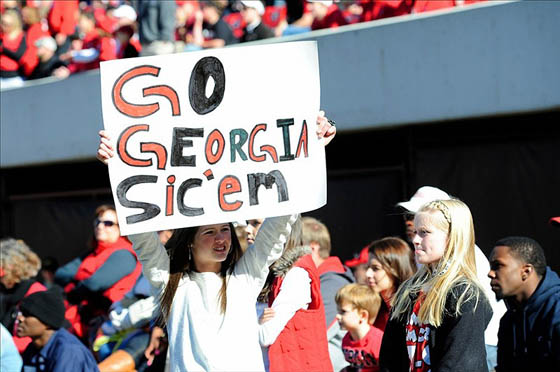 Georgia is now no. 3 in the BCS Standings. Dale Zanine-US PRESSWIRE

The Georgia Bulldogs have moved up to 3rd in the Week 13 BCS Standings that were released this evening. Notre Dame is first followed by Alabama at no. 2.

Georgia moved up two places from no. 5 after top-ranked Kansas State was hammered by Baylor and no. 2 Oregon was upset in overtime by Stanford.

The Dawgs being ranked third is huge because it means they now control their own destiny to the BCS National Championship Game. First, Georgia must beat in-state rival Georgia Tech this Saturday (Noon, ESPN).

Then, UGA must win the SEC Championship Game on Dec. 1 (4 p.m., CBS). Their likely opponent will be the 2nd-ranked Alabama Crimson Tide, provided they beat Auburn this weekend.

If Georgia beats Georgia Tech and Alabama, and Notre Dame beats USC this weekend, the Bulldogs would face the Irish in the 2013 Discover BCS National Championship Game.

If Georgia loses in the SEC title game, their likely destination would be either the Capital One Bowl, Outback Bowl, or Chick-fil-A Bowl.

Listed below are the current 2012 BCS rankings (complete info):