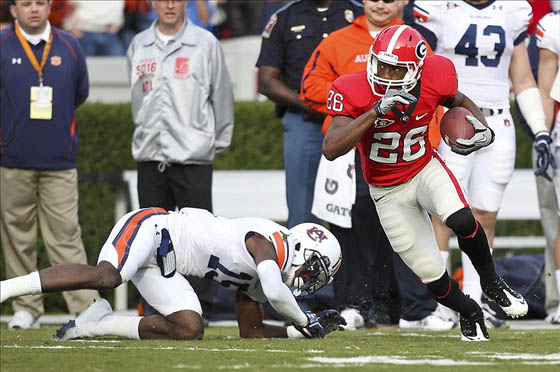 A win over Auburn would clinch the SEC Eastern Division title for Georgia and secure a trip to Atlanta for the Championship Game. It would also give the Bulldogs their second straight win over the Tigers and even the overall series at 54-54-8.

Last season in Athens, Georgia destroyed Auburn 45-7, exacting a bit of revenge after losing at Auburn 49-31 in 2010. The win was so sweet that it produced the following video:

Auburn finally notched their second win of the season last week over hapless New Mexico State. Prior to that victory, the Tigers had lost five straight SEC contests.

Hopefully Georgia carries their focus and intensity from the Florida and Ole Miss games into the Auburn game Saturday night. A win their and a potential matchup against top-ranked Alabama looms on the horizon.