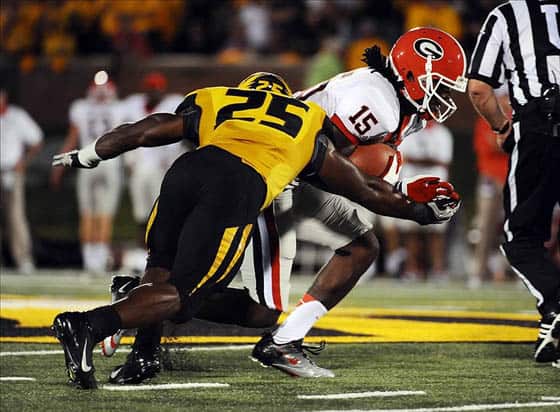 Marlon Brown should have a big game against FAU. (Dak Dillon-US PRESSWIRE)

This weeks opponent, Florida Atlantic, has struggled mightily this season on offense. Despite being 1-1 on the season, they have only scored 24 total points. This will prove to be too much for the Owls who will be facing a Bulldogs defense that should begin to reach their potential over the next few weeks with four defensive starters set to soon return.

While the Bulldogs should dominate this game, many eyes will be watching for the return of two of those projected defensive starters in cornerback Sanders Commings and linebacker Chase Vasser. While it has not been reported, it is still believed that safety Baccari Rambo and linebacker Alec Ogletree will remain suspended two more games.

If Rambo and Ogletree do not return until the Tennessee game in week five, the play of Commings and Vasser becomes more crucial. Not playing until week five could lead to communication errors and poor game conditioning. With the high powered Vols offense in town, the Bulldogs will need as many bodies as possible.

The Bulldogs defensive unit does have several players with small nagging injuries. As a result, it is important that they put the Owls away early to give their starters as much rest as possible. Although Florida Atlantic has not scored many points this season, they do have a quarterback who can keep his offense on the field longer than the Bulldogs would like if they do not get pressure on him Saturday.

Owls quarterback Graham Wilber has completed 35-of-45 passes this season for 386 yards and 3 touchdowns, including the go-ahead TD in the fourth quarter of the Owls season opener. The rushing attack for Florida Atlantic has been anemic to say the least. The Owls are 88th in the nation in rushing yards per game and have yet to score a rushing touchdown.

As a result, if the Bulldogs secondary can shut down Owls leading receiver Byron Hankerson, they should have their first shutout of the season.

The Bulldogs offense is looking to build on another strong offensive showing. Although quarterback Aaron Murray has started slow this season, he has finished with the hot hand completing 37-of-61 passes for 500 yards and six touchdowns to only one interception.
However, the talk of Athens has been the dynamic running back duo of freshmen Todd Gurley and Keith Marshall. Gurley has been the hot hand thus far with four total touchdowns and an impressive 9.2 yards-per-carry average. Moreover, he was a missed horse-collar tackle away from another 100-yard game last week.

Marshall’s numbers have not been as impressive as Gurley’s, but he has been a shoe string tackle away from three big touchdown runs this season. Expect him to finally break one this week versus Florida Atlantic.

The offensive player I will be watching the closest this week is Marlon Brown. The senior wide receiver caught eight passes for 106 yards and two touchdowns in his first game of the season last week. Brown was a Parade All-American, Tennessee’s “Mr. Football” and Scout.com’s No. 2 wide-receiver prospect in the nation coming out of high school. However, coming into this season, he had been considered a recruiting bust.

If Brown has truly become the player that he was once projected, this Bulldog offense will surpass all preseason expectations.

The Bulldogs will not come out with the same lackadaisical approach that they did against Buffalo. This game will be over before the half and Christian LeMay will get some much needed reps.