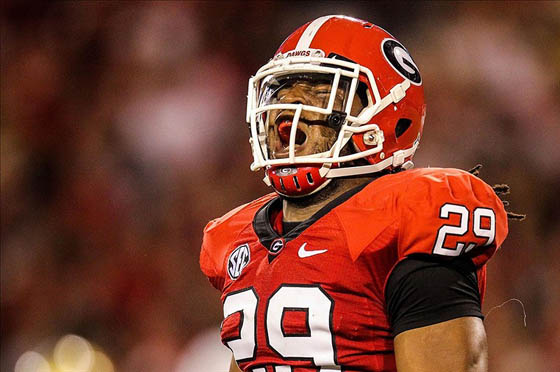 Jarvis Jones celebrates a sack in the 1st half. Daniel Shirey-US PRESSWIRE

The Georgia Bulldogs crushed the Vanderbilt Commodores 48-3 on Saturday night to improve their record to 4-0 overall and 2-0 in the SEC. It was the 4th straight game that Georgia has scored 40 or more points in a game, which is a new school record.

The Dawgs accomplished that with seven touchdowns on the night. Georgia racked up 567 yards of offense, including 302 yards on the ground and 265 yards through the air.

Once again, quarterback Aaron Murray spread the ball around the field, completing passes to nine Bulldogs. Murray finished the game 18-of-24 for 250 yards and two touchdowns. Marlon Brown led the receiving corps with five receptions for 114 yards and a touchdown. Tavarres King also had four receptions for 58 yards and a TD.

Although the Georgia defense kept Vanderbilt out of the end zone, the Commodores did manage to gain 337 total yards. However, Vandy gained 86 of those yards in the 4th quarter when the game was already 48-3.

All-American Jarvis Jones led the defense with a sack and seven tackles, including four solo and three for a loss.