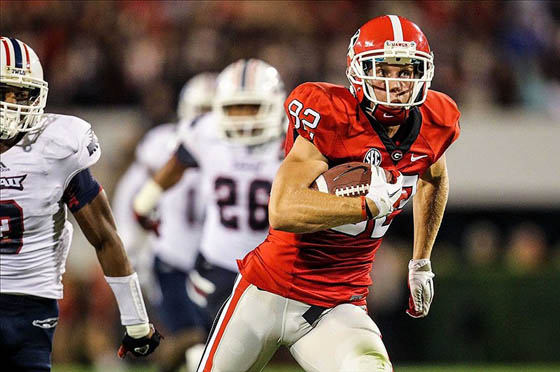 The Georgia Bulldogs racked up a school record 713 total yards en route to a 56-20 blowout win over the Florida Atlantic Owls.

Quarterback Aaron Murray finished with a career record 342 yards passing. He completed 14-of-19 passes with two touchdowns through the air and two on the ground.

With the win, Georgia improves to 3-0 overall (1-0 SEC). This is the first season the Bulldogs have started 3-0 since 2008. That year, Georgia finished 10-3 overall and beat Michigan State in the Capital One Bowl.

With All-American linebacker Jarvis Jones sidelined with a groin and shoulder injury, the Bulldogs defense got off to a shaky start. FAU racked up 157 yards of offense in the first quarter and added another 105 in the second quarter.

After that score, the Georgia defense shut down FAU. The Owls managed a mere 50 yards of offense in the second half and only scored one defensive touchdown.

Freshman Todd Gurley and Keith Marshall both eclipsed 100-yards on the ground for the Bulldogs. Gurley had 111 yards on 10 carries and one touchdown, while Marshall rushed 10 times for 104 yards and a TD.

Wide receiver Michael Bennett had a career day for the Bulldogs. The sophomore caught four passes for 110 yards and a touchdown. His 67-yard TD reception late in the first half put the Dawgs up 28-14.

Tight end Arthur Lynch was also a top target for Aaron Murray. Lynch caught three passes for 73 yards, including a 36-yard touchdown reception to open the second half.

Next up for the Bulldogs is a visit from Vanderbilt on Saturday, Sept. 22. The game will be televised by ESPN2 at 7:45 p.m. ET.