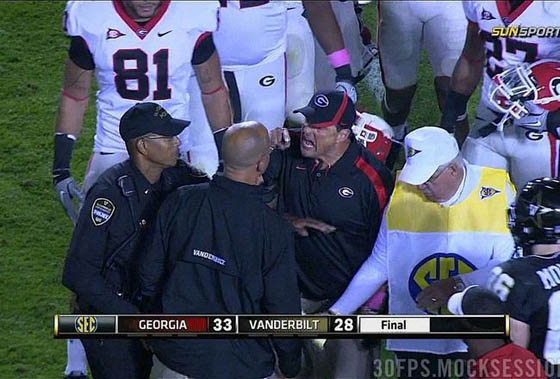 On Saturday, the 5th-ranked Georgia Bulldogs host the Vanderbilt Commodores in Athens. The game will be televised by ESPN2 and ESPN3.com at 7:45 p.m. ET.

Georgia heads into the game 3-0 overall (1-0 SEC) after wins over Buffalo, Missouri, and Florida Atlantic. Vanderbilt is 1-2 (0-1 SEC) after falling to South Carolina and Northwestern and defeating Presbyterian.

The Bulldogs will definitely not overlook the Commodores in light of how close the game was last year and the fireworks that ensued post-game. Three players, including current UGA safety Shawn Williams, were suspended for various flagrant fouls in the game.

After the game, Vanderbilt head coach James Franklin sought out Williams for a few words, likely regarding a hit he delivered. UGA defensive coordinator Todd Grantham proceeded to step in and give Franklin a few words of his own (see above picture).

A win over Vanderbilt would give the Dawgs their first 4-0 start since the 2008 season. Georgia has now started the season 3-0 seven times under head coach Mark Richt.

Safety Bacarri Rambo and linebacker Alec Ogletree are each listed on the depth for the Vanderbilt game. However, they have been listed there all season. Both will likely be suspended for the game Saturday, which should be their fourth and final game missed.