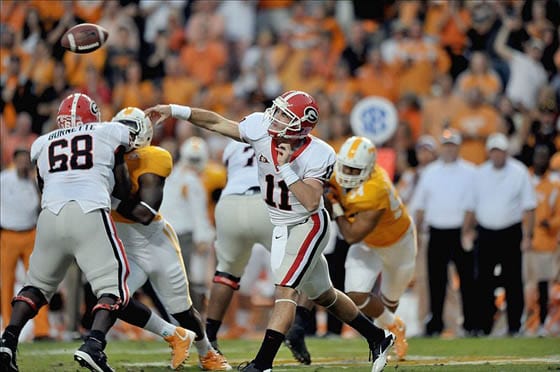 On Saturday, the 5th-ranked Georgia Bulldogs host the Tennessee Volunteers in Athens. The game will be televised by CBS at 3:30 p.m. ET.

Tennessee heads into Athens 3-1 overall (0-1 SEC) after defeating Akron 47-26 last weekend. The Volunteers opened the season with a 35-21 win over NC State in the Chick-fil-A Kickoff Game, and later beat Georgia State 51-13 and fell to Florida 37-20.

The Volunteers lead the overall series against the Bulldogs 21-18-2, but Georgia has won two in a row and three of the last four.

UGA will finally be at full strength with the return of safety Bacarri Rambo and linebacker Alec Ogletree. Both served four-game suspensions to open the 2012 season. Linebacker Chase Vasser and defensive back Sanders Commings returned from suspensions last week.

If you are heading to the game on Saturday, don’t forget to wear red! Head coach Mark Richt called for a “Red Out” earlier this week.

“We need the Bulldog Nation to get there early on Saturday for the Dawg Walk, wear red, and get loud enough to shake the Hedges,” Richt said.