UGA President Michael Adams to step down in 2013

UGA President Michael Adams to step down in 2013 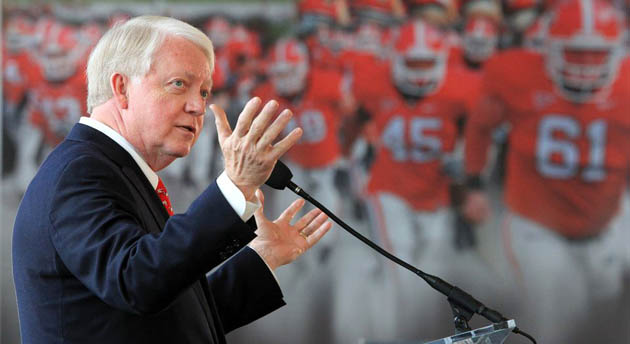 University of Georgia President Michael F. Adams will step down effective June 30, 2013, the AJC has reported. An official announcement will be made on Thursday.

Michael Adams has been the President at UGA since 1997. Under his leadership, enrollment has risen from 29,000 to almost 35,000. Adams has received more than 50 awards in higher education, including the Knight Foundation Award for Presidential Leadership, the Pioneer Award for Leadership in Civil Rights and the James T. Rogers Award from the Southern Association of Colleges and Schools.

But some will remember Adams as a President who got too involved in athletics, namely the football and basketball programs.

In 2003, Adams and athletics director Vince Dooley removed the Georgia basketball program from the SEC and NCAA Tournaments after violations involving former head coach Jim Harrick were uncovered. Some argue that was a knee-jerk reaction and that the school should have waited for the investigation to run it’s course.

Others argue that Harrick shouldn’t have been the coach in the first place as he supposedly went over Vince Dooley’s head to make the hire.

In football, Dr. Adams has consistently clashed with UGA fans over items such as tailgating and parking. He also “forced” Vince Dooley to retire as athletics director and lobbied to end the use of the title “World’s Largest Outdoor Cocktail Party” for the Georgia-Florida game, among other things.