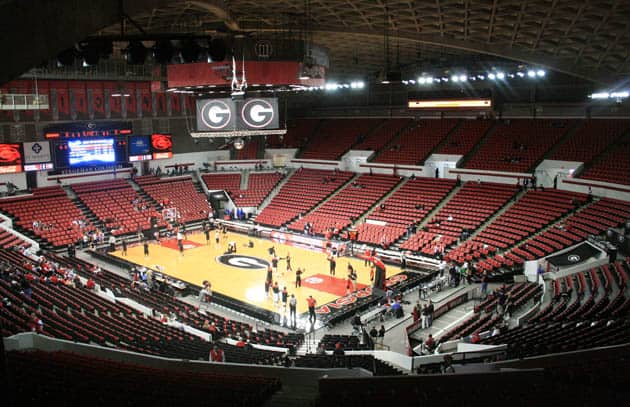 The downward spiral continues for the Georgia Bulldogs Basketball program. The AJC and other sites are reporting that guard Billy Humphrey was arrested early this morning for underage possession of alcohol and failure to obey a traffic device. This comes on the heels of a four-game losing streak after last nights 67-59 loss at home to the Vanderbilt Commodores.

At a minimum, Humphrey is likely facing a 3-game suspension for his latest arrest. Back in November, he was arrested for possession of an illegal knife on campus. Humphrey kept a souvenir butterfly knife in his dorm room, evidently not knowing that it was a felony to have a knife with a blade longer than 2 inches on campus. He was placed on 18-months probation by the University. This compounds the current situation, as it could lead to Humphrey’s dismissal from the team and even UGA.

Dennis Felton’s job just got even harder and his seat is getting hotter. First Mike Mercer and Takais Brown were kicked off the team. Then Rashaad Singleton quit mid-season. Now Billy Humphrey is likely to be suspended and could be dismissed from the team or the University. This is another devastating blow to a team that is struggling offensively, averaging only 62 points per game in SEC play.

Update: Humphrey has been suspended for at least 3 games due to his latest arrest. According to the police report, Humphrey was stopped for jaywalking at approximately 1:23 a.m. The officer smelled alcohol and administered a field breath test which resulted in a .03. Humphrey was then arrested and booked into the Clarke County Jail.